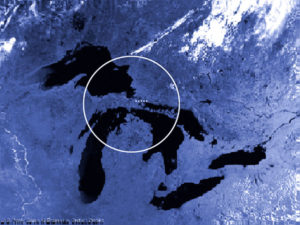 Location of the ethanol plant near Kincheloe, Mich. Timber would be taken from within a 150-mile radius, represented by the circle. About 1/3 of the area in the circle is water from lakes Superior, Michigan and Huron.

Kincheloe, Mich. — In so many ways, capitalism is murdering planet Earth.

I live in the far north. Go to Michigan and head north as far as you can go to the Canadian border, between lakes Superior, Huron and Michigan, and you will find some of the most beautiful land in this country.

Biodiversity is what we have here. Nearby Tahquamenon Wetlands is one of the biggest wetlands in the U.S. There are rivers, lakes, forests and then more forests, with a huge variety of tree species that provide the habitat for many animal and plant species.

Of vital concern to us is the endangerment of these trees and water by certain corporations that, like all corporations, will do anything for profit. Tree-based fuels are the next horizon for the energy industry.

The residents of Kincheloe, Mich., are about to be neighbors to the first commercial wood ethanol refinery in the world. What is going to change in our community and in the whole northern part of Michigan as a result of this refinery?

For this one factory, trees will be cut in a 150-mile radius from Kincheloe, throughout most of Michigan’s Upper Peninsula, into Canada to the north and all the way to Grayling, Mich., to the south. Wood will be cut from federal, state and private lands equaling 3,620 green (new) tons of high-density hardwood per day. Dust, odors, contaminants and heat will be released into the air, including carcinogens such as benzene derivatives. One million gallons of water per day will be used from the local aquifer, contaminating the area with the resulting waste water.

There are many more negatives about this project. A totally new genetically modified bacteria is being used to break down the cell walls of the wood to make ethanol fuel for vehicle use. No one knows what will result if this modified organism escapes into the surrounding community.

Approximately two units of energy will be used in the processing to create one unit of “green” fuel. With double the energy used compared to that produced, this is not a green project, as the government would have us believe. Yet this will be a model for at least another 40 plants of this nature throughout the U.S.

The plant will only create about 50 high-tech jobs — with workers transferred from Texas and New York. Eventually there will be a net loss in job creation for the area because of the increased price of hardwood and competition from the refinery.

There is no emergency evacuation plan as legally required for the community of 5,000, including 3,000 inmates in the four prisons in the township. Very few people talk about the safety of the inmates, or the fact that a huge minority of Kincheloe residents are Native people.

When you are fighting Valero — the biggest refinery builder in the world — and the federal, state, county and township governments, the fight becomes a symbol of what the capitalist system is really doing to this whole planet. The Obama administration is totally behind this project, having extended an $80 million federal grant and waived anti-pollution laws to allow this refinery to go forward. The struggle to block the refinery has international repercussions because the Canadian government is also moving forward to allow this forest-destroying refinery to come there to harvest trees.

Valero, which is also the beneficiary of state and local grants and tax breaks, has one of the worst records on labor rights as well as environmental issues.

A grassroots fightback committee is resisting this project. Township meetings have become one of the frontlines where residents confront the Kincheloe Township Board because it is allowing this project to be built. We now have half the board members against the corporation, although this will not make much difference because the current board has already given the corporation all it asked for. While attempting to stop this refinery, we have also confronted various federal, state and county agencies over the last four years.

Recently some 100 members of this small community attended a public forum to learn the truth about their monster neighbor, one quarter-mile from Kincheloe. An anti-capitalist viewpoint is promoted at all of these meetings.

The Michigan Sierra Club recently lost a federal lawsuit attempting to block the refinery. An appeal of the decision is being considered. If we win, it will cost Valero $100 million in federal subsidies and tens of millions promised by state and local authorities.

Many diverse forces are allied against the refinery, including Kincheloe residents, hunters, fishers, others who vacation up north, smaller lumber businesses, lumber workers and more. The governing board of the Sault Ste. Marie Tribe of Chippewa Indians passed a resolution against building the refinery approximately two years ago. This tribal board represents about 40,000 Native Americans in Michigan and Ontario, Canada.

This battle is a long and complex struggle that involves many issues, but behind the complexity is the simple equation of profit-seeking corporations and their puppet government officials — from the very top to the local — combining to undermine communities, especially communities of color, and the environment.

The fight continues on a lot of fronts. Even if we fail in the courts, the battle will continue here and in other areas where energy monopolies plan to build this kind of factory. Of course, it is part of the struggle against this capitalist social order, where the life of the planet is now on the line.

Klein was a plaintiff in the lawsuit to block the Valero refinery.