Excerpts from a talk by Abayomi Azikiwe, editor of Pan-African News Wire and WW contributing editor, at the Nov. 17-18, 2012, Workers World Party conference in New York. See video at youtube.com/wwpvideo. 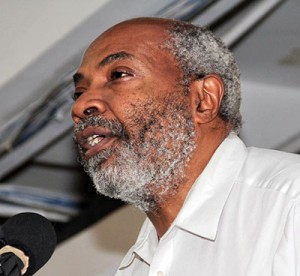 Despite claims by the capitalist governments internationally and their apologists in the corporate media, the world economic crisis is worsening.

The financial institutions and other corporate entities are at the root of the current economic malaise. This is true not only for the U.S. but for the entire globe where billions still live on less than $2 per day.

Recent unrest in the Republic of South Africa derives from the global crisis in the capitalist and imperialist system. Many were shocked throughout the left and progressive communities when over 50 workers lost their lives in disturbances surrounding both wildcat and protected strike actions in the mining and transport sectors of the economy, the largest on the continent.

Workers in South Africa want the same things that their class brothers and sisters need all over the planet: a decent salary, quality homes, utility services, education for themselves and their families, and the right to determine the conditions under which they labor.

Although we condemned the police killings of miners at Marikana on Aug. 16, which resulted in the deaths of 34 workers and injuries to many more, we placed the onus of this crime on the transnational extractive firms that are largely controlled by Western-based capitalists. South African capitalism and its links to the world system have profited immensely from the growth of the gold, diamond, platinum, coal and iron ore sectors of the economy.

We were some of the earliest supporters inside the U.S. of the African National Congress and its allies within the revolutionary democratic movement, the Congress of South African Trade Unions and the South African Communist Party. We can recall vividly how the ANC was labeled “terrorist” in the same fashion that other movements in the Middle East and the Muslim world are characterized today.

The unrest in the mining industry in South Africa has spread to other sectors including the civil service and agriculture. We support the workers in their just struggles for a living wage and better living conditions. Nonetheless, we realize that in order for this to truly take place the South African revolution must take the path toward economic independence and scientific socialism.

We know that based upon their history of struggle, the South African people will succeed in realizing their strategic objectives. It was not long ago that the imperialists doubted the ability of the peoples of Southern Africa to reach the levels they have achieved thus far.

We must continue our support of the people of Southern Africa in the next phase of the struggle for genuine liberation. With the political crisis engendered by the recent wave of strikes, a broad, sweeping debate has erupted within the national democratic movement led by the ANC.

In neighboring Zimbabwe, the country embarked upon a land reform program in 2000 that confiscated farms stolen by British settlers in the late 19th century. These farms were broken up and turned over to millions of African agricultural workers.

The imperialists met this process with sanctions and threats of regime change against the Zimbabwe African National Union (ZANU-PF) ruling party inside the country. Yet the economic impact of these reforms has been successful in raising production and income levels among African farmers.

The experience of Zimbabwe is being looked at seriously in neighboring Namibia, headed by the South-West Africa People’s Organization, a close ally of the ANC and ZANU-PF. Throughout the entire region of Southern and East Africa, the question of land redistribution is no longer an academic one, but is becoming a more viable political option in Kenya as well as in other states.

It is not surprising then that the imperialist states have targeted Zimbabwe. Should the ANC take on the ­much-needed reforms, it too will come under a more sustained attack. When this occurs, we must be in a position to defend the process as a much-needed step in the right direction toward a noncapitalist path of development.

The U.S. Africa Command (AFRICOM) has intensified its efforts on the continent with the 2011 war against Libya, the ongoing proxy war in Somalia, and the threats of intervention in East and Southern Africa. The role of AFRICOM is clearly linked to the growing significance of African oil and mineral resources to the world capitalist system.

Over the last year, new findings of oil and natural gas occurred throughout all East and Central Africa, providing greater opportunities for transnational corporations and banks. The military interventionist policies of the U.S. through successive administrations, including the current Obama regime, will intensify. We must follow these events closely and oppose U.S. military intervention on the continent.

As we did with respect to Libya last year, we must condemn the role of imperialism and build closer ties between the workers and oppressed on the continent and those in the U.S.