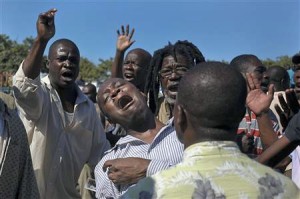 After granting notorious Haitian dictator Jean-Claude Duvalier a diplomatic passport, the Haitian government ironically called former President Jean-Bertrand Aristide in for questioning Jan. 9 on some specious, unfounded charges going back to the 1980s before he was president.

Thousands of Aristide’s supporters — some who had walked for up to four hours from their neighborhoods — gathered at the courthouse in capital city Port-au-Prince. After Ansyto Felix, a spokesperson for Fanmi Lavalas, Aristide’s party, explained that the questioning had been moved to Aristide’s house — about 10 miles away — his supporters set off through the city.

Felix told the press, “The cost of living was not expensive when Aristide was President of Haiti. Today there is political persecution of those who are hungry.” (Haiti Action Net, Jan. 10)

“Titid ou lanmò” (“Aristide or death”) was their chant as the protesters marched for nearly four hours through the city, picking up supporters. The young militants in Moleghaf (Movement of Liberty and Equality for the Fraternity of Haitians) can be seen in a YouTube video running from time to time as they and thousands of others poured through the streets. Moleghaf is one of the more active components of Lavalas.

Lavalas pointed out that this attack on Aristide is really an attack on democracy in Haiti and that the reason why Lavalas didn’t win the last election was that they were kept off the ballot.

While there is massive opposition to President Michel Martelly among the poor and working people of Haiti, some sections of the bourgeoisie are also growing more opposed.

In the Nouvelliste, the largest and oldest bourgeois paper in Haiti, Lesley Péan wrote Jan. 1: “If Haiti is today a country in ruins, it is not just due to the earthquake in 2010, the cholera epidemic, the hurricanes that periodically devastate the country. It is also and especially due to the way the local government is being managed, which has accelerated the decomposition of the institutions which guarantee the good direction of the ship of state. [Twenty-two] cases of maladministration, abuse of authority, scandals and assassinations have been reported since Martelly swore his oath of office.”

Péan mentions Martelly’s corruption and the big contracts he has awarded to Dominican firms, cutting Haitians out of the money their government is spending. But his main focus is that the Haitian government has not been able to engage international donors to help with reconstruction. He ties Martelly to the ”disappearance” of hundreds of millions in aid money during the Duvalier years. Martelly makes no bones about being a Duvalier supporter.

Whether or not these charges are true, the fact that Péan has made them indicates that a section of the Haitian bourgeoisie is upset with his administration.

The government is not just relying on maneuvers to undercut Lavalas and the progressive movement in Haiti. More and more it is turning to its “armée rouge” — its unofficial “rose army” that recalls to Haitians the Tonton Macoutes, a semi-official police force under two Duvalier regimes (1959-1986) that attacked demonstrations and reinforced the repression the cops practice.

Rising resistance and bourgeois opposition are going to make it hard for Martelly to hang on to the presidency. There are even signs that the U.S., Martelly’s puppet master, wouldn’t mind a change.