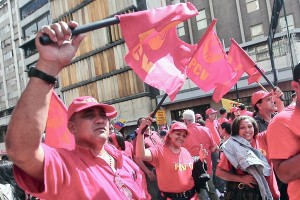 Jan. 10 — The people of Venezuela poured into the streets by the hundreds of thousands in the country’s four major cities today to defend recently re-elected President Hugo Chávez and his government.

Because Chávez is still under treatment for cancer in Havana, Cuba, he was unable to participate in the scheduled inaugural ceremony. Anti-Chávez forces in Venezuela — mainly from the wealthy oligarchy — have tried to provoke a constitutional crisis using the president’s inability to appear as a pretext. The Supreme Court, however, ruled a day earlier that based on Paragraph 231 of the Constitution the inauguration could be postponed to a later date.

Minister for communication and information, Ernesto Villegas, warned the demonstrators in Caracas about these sectors of the population — “a minority who refuse” to accept the decision of the Supreme Court and charged that these are the same forces that led the coup against the government in April 2002. A mass uprising at that time smashed the rightist coup and pushed the Bolivarian revolution forward. (aporrea.org, Jan. 10)

Vice President Nicolás Maduro, speaking to the crowd outside the presidential palace, led thousands of people in an oath of absolute loyalty to the president. Before Chávez had left to go to Cuba for his operation in December, he named Maduro as the person to take responsibility for governing in his absence. The swearing in ceremony has been indefinitely postponed.

Among those in Caracas to show support for the Bolivarian revolution were heads of state and government from the region, including Nicaragua’s Daniel Ortega, Bolivia’s Evo Morales and Uruguay’s José Mujica, all of whom praised Chávez’s contributions. Most governments in the region have expressed support for Chávez and for his government’s continuance. From outside Latin America, head of state Mahmoud Ahmedinejad of Iran was in Caracas today in solidarity.

Chávez won more than 54 percent of the popular vote on Oct. 7, with the second-place candidate, rightist Henrique Capriles, getting only 43 percent. In local and regional elections on Dec. 16, Chávez’s United Socialist Party of Venezuela (PSUV) won 20 of the 23 governor positions. Two-thirds of the National Assembly are Chávez supporters, both from the PSUV and from other parties.

One of the parties that is not part of the PSUV but still supports Chávez and the revolutionary process is the Communist Party of Venezuela (PCV).  In a Jan. 10 article, Carolus Wimmer of the political bureau of the PCV wrote:

“The pro-imperialist rightwing is looking for legalistic subterfuges to twist the sovereign will of the people and attack President Chávez. For the PCV there is no doubt that the new presidential term of President Hugo Chávez, which is to last six years, begins today, Jan. 10. …

“President Chávez has been re-elected by a majority of voters, which is the embodiment of popular sovereignty constitutionally established in Article 5, which literally states that ‘sovereignty resides in the people and is not transferable.’ Thus both in fact and in point of law the will of the people is clearly expressed that their president is and will continue to be Hugo Chávez.”

Wimmer noted that while speaking softly, U.S. imperialism was provoking the Venezuelan pro-coup elements to aggressively attack the Bolivarian government. He insisted that “revolutionary and anti-imperialist forces must respond forcefully and with organization to defend the popular will expressed on Oct. 7. We also call upon the revolutionary forces of the continent to express their solidarity in various ways with President Chávez and the Bolivarian process.”

Demonstrations already took place today in Honduras, among other countries, where people from the Popular Movement gathered in solidarity with Chávez and Bolivarian Venezuela.

In the United States, the International Action Center, the Alberto Lovera Bolivarian Circle, the Alliance for Global Justice, HondurasUSAResistencia, Cuba Solidarity New York, the Latin America Solidarity Coalition, the July 26th Coalition, the Nicaragua Network, the May 1st Coalition and others have called on “the progressive, anti-war and solidarity movements to come out in solidarity with the revolutionary process in Venezuela and participate in National Days of Action from Tuesday, Jan. 22, thru Thursday, Jan. 31.” Actions have already been set in New York City, Philadelphia, Los Angeles, Milwaukee, Detroit, Boston and Tucson, Ariz. For information see iacenter.org.