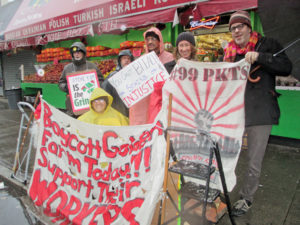 On Jan. 5, one of numerous daily picket lines was held in support of workers at the Golden Farm grocery in Brooklyn, N.Y.  These protests are demanding that these immigrant workers get a union contract and also a combined back pay of $500,000 as compensation for the time they have been paid less than the minimum wage by the store’s boss, Sonny Kim.

In 2011, the courts recognized that Golden Farm workers had the right to be organized into the Retail, Wholesale and Department Store Union and receive at least a minimum wage — $7.25 in New York state.

The workers are now putting pressure on Kim to come back to the bargaining table and settle on a contract.  Negotiations are scheduled for Jan. 21.  As part of the talks, they want the workers who Kim retaliated against to recover the hours of work they have lost; a raise to $7.50 an hour; job protection; and sick and vacation time for everyone.  They also seek a real voice at the job — along with respect.

Despite Kim’s ongoing attacks, the determination of the Golden Farm workers and supporters grows ever stronger. Organizations like 99 Pickets and Occupy Wall Street continue to join the picket lines, along with organizers from Communities for Change and an occasional political leader. Many shoppers listen attentively as supporters explain the workers’ plight; they then decide to boycott Golden Farm.

New York City’s working class is showing greater class consciousness with regard to underpaid grocery, Walmart, fast food and carwash workers, among others. Anti-racist solidarity is key, since workers of color are paid less and are more exploited.

The better-paid teachers, transit and postal workers are experiencing threats of union busting and layoffs and realize this can leave them on the same page as low-wage workers. Together, all workers, regardless of nationality and status, can develop the unity to fight back and crush the ruling class — the 1%. We can run our own jobs and services for the benefit of the working class, which does the work and creates all the wealth.