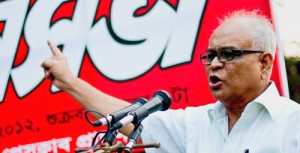 Workers World conducted the following interview with Khalequzzaman, the general secretary of the revolutionary Socialist Party of Bangladesh (http://spb.org.bd), regarding the fire in a textile factory that took the lives of 124 workers, mostly women, last Nov. 24. The factory had produced clothing for Walmart and other major international retailers.

WW: What is the relationship between the big textile manufacturers and retailers in the imperialist countries (Walmart, Carrefour, etc.) and the sweatshop owners in Bangladesh?

Kh: Taking advantage of competition among the garment exporting countries, the transnational textile manufacturers and retailers always want to buy products at the possible cheapest price. But when they sell those with their brand name to the consumers, they sell at a high price. The rate at retail outlets in the USA is often three to four times higher than the export price.

Driven by the motive of maximizing profit, the owners become so greedy that they are not interested in investing in ensuring the minimum safety measures in the working place. The laws in Bangladesh regarding this issue are weak, but the owners do not conform to even those weak laws.

This is the reason why the number of accidents and fires is increasing in the ready-made garments sector of Bangladesh and the death toll of workers is rising in such cases. Those accidents are happening from ignoring the safety measures and law guaranteeing a safe working environment.

The prime objective of the big imperialist corporations and the Bangladeshi owners is to exploit cheap labor. This common interest has made relations between them sweet.

WW: What is the relationship of the big corporations and the factory owners with the government in Dhaka?

Kh: The government of Bangladesh is doing its best to protect the owners’ ability to exploit the workers, whether the owners are Bangladeshi or foreign. The government bows down to unfair demands from the owners, who plead that these demands will increase export revenue. It deprives the workers, preventing them from exercising their legal, democratic and trade union rights.

In addition to these, the U.S. government is collecting 30 to 40 percent tariffs on Bangladeshi garments exported to the U.S. This is another argument that the Bangladesh owners and the government put forth in order to deny the demand for better wages.

WW: How are the workers and their communities organizing in response to the tragedy of Nov. 24?

Kh: Workers continued their protest for four days at the Savar-Ashulia industrial area after Nov. 24 when 124 workers were killed in a garment fire in that area. Labor groups organized demonstrations across the country. They demand that the factory owner be punished and [for] appropriate compensation, treatment of the injured [and] rehabilitation of workers [from] the BGMEA [Bangladesh Garment Manufacturers and Exporters Association] and government. But due to the absence of trade union rights, the workers could not continue their protest.

WW: What is the Socialist Party doing in reaction to this latest crisis?

The Socialist Workers’ Front organized marches, demonstrations and they termed the incident as killings, so the owner should be punished. The government authority responsible for inspection of the factory safety system also should be punished.

A general strike was called on Dec. 18 across the country by the left parties. The strikers’ demands included the demand to arrest the factory owner and to ensure workers’ safety. Garment workers participated in the strike in most of the places.

WW: Is there any message to workers in the United States that you would like to send or that the textile workers there would want to send? How can we help?

Kh: We appeal to workers in the United States and all around the world to stand beside workers of the Bangladesh ready-made garment sector. They work under the world’s lowest wages, most inhumane working environment and at high risk of death. The working people of Bangladesh are fighting to get their rights. We expect that supporting these struggling workers is the moral responsibility of the workers all around the world.