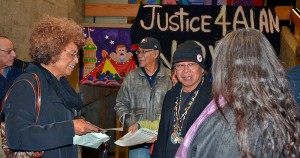 Alan Blueford would have turned 19 on Dec. 20, but instead he was killed by Oakland, Calif., police last May 6. To commemorate his birthday and to say no to all acts of police violence and murder of Black and Brown young men, more than 450 people from the Bay Area packed the Laney College auditorium in downtown Oakland on Dec. 18.

The evening, an outpouring of support and love for the Blueford family, also became a loud, angry cry of protest against all forms of police torture and murder.

Speaking at the beginning of the program, Jeralyn Blueford said, “What they did to my baby was wrong, and we’re here to do something to stop it. We have to organize. We have to march. We have to stop the murder.”

Joining the Bluefords on the stage throughout the night were family members of other young Black and Brown men who have been shot and killed by police, from Oakland to New York City. Slides and videos were shown throughout the evening to commemorate the deaths of many youth of color.

Despite the sadness and mourning that rippled throughout the evening, the intense, fiery messages of warriors, old and new, in the struggle against racism and oppression were heard loud and clear.

Clarence Thomas, a longtime activist from International Longshore and Warehouse Union Local 10 and a leader of the Million Worker March Movement, set the tone early in the evening, saying, “The nation mourns and expresses outrage over the murder of 20 children and six adults in Connecticut at the Sandy Hook Elementary School, and that outrage is legitimate. But where is the outrage to the mass escalating murder and brutality against our youth? Where is the outrage to the racist police shootings of our young people, Alan Blueford, Oscar Grant, Trayvon Martin and many others?”

Thomas added, “Labor has a responsibility because labor is the most organized sector of the working class.” The union leader recounted the long history of the ILWU, from a 1934 four-day port shutdown to protest  the police murder of two San Francisco dockworkers to the 2010 shutdown of the West Coast ports in solidarity with Justice for Oscar Grant. Grant was a young Black man who was shot and killed by Bay Area Rapid Transit cop Johannes Mehserle on Jan. 1, 2009, while handcuffed and restrained by other police.

Blueford’s killing has propelled his family into spearheading a national campaign against similar police shootings and murders. The Justice for Alan Blueford Coalition has actively sought out families around the country who have been targeted by the police.

The Blueford anti-police brutality campaign has been joined by family members, supporters and friends of Oscar Grant. One such member, Tim Killings, president of the Laney College Black Student Union, delivered a moving solidarity statement in which he explained: “We are more than just a student organization. We are deeply concerned members of the Oakland community where Black, Latino and poor youth are under attack. We advocate doing whatever is necessary to get justice for Alan Blueford.”

Other speakers at the rally included Angela Davis, a former political prisoner and longtime activist against racism and mass incarceration, who is now a professor at the University of California, Santa Cruz.  Davis, who also identified herself as a longtime resident of Oakland, said, “When I think about Alan Blueford, I think about Li’l Bobby Hutton, who was killed by the Oakland police a few days before he would have celebrated his 18th birthday. The eyes of the world are on Oakland.”

A panel of social justice organizers and family members of young people killed by the police was featured in the second part of the program. the Rev. Cortly “C.D.” Witherspoon, who traveled from Baltimore, summed up the feeling of the group when he said, “There is nowhere else I would rather be than with the Bluefords fighting for justice.”

Witherspoon, head of the Baltimore Southern Christian Leadership Conference and a leader of the People’s Power Assembly, gave testimony about 15 racist killings by the Baltimore police of Black youth since the beginning of the year. Witherspoon said that only after the community launched their own investigation did the truth come out about Anthony Anderson Sr., who was tackled by police and killed in front of his two-year-old granddaughter. The SCLC leader stated, “Not only is this brutality, it is terrorism.”

Constance Malcolm and Franclot Graham, the parents of Ramarley Graham, an 18-year-old Black man, described how their son was shot to death in his Bronx home on Feb. 2 by New York Police Officer Richard Haste. The two travelled across the country to express their solidarity with the Blueford family and other victims of police terror and challenged the crowd to: “Stand up with all of the families and fight.”

Also speaking was Fred Hampton Jr., the son of the Chicago Black Panther Party leader who was murdered in his bed by Chicago police in 1969.

This event was much more than a commemoration. It was a call to organize communities around the country against police violence and brutality. As Wanda Johnson, the mother of Oscar Grant, stated, “We have to come together to fight for justice. We will not take what they are doing to our Black and Brown children anymore.”