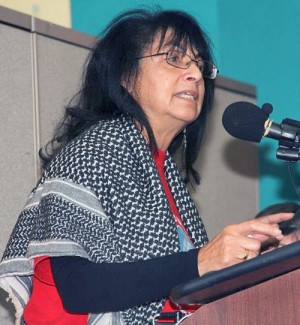 This is a talk by Berta Joubert-Ceci of the Philadelphia branch of Workers World Party to the November WWP National Conference.

Since Hugo Chávez took office as president in 1999, Venezuela has been a ray of hope for millions of people around the world, but more so for the people in Latin America. The Bolivarian Revolution sparked a new wave of revolutionary struggles all around the region. Each process is different in every country, but they are tied to each other not only by their geographical situation, but by their aims to lift the masses of people out of poverty, rely less on the U.S., and very important, to integrate the region. And now, to follow a socialist path.

When Chávez declared that the revolution would be built on the basis of socialism, every revolutionary was ecstatic. He particularly mentioned that it would be the socialism of the 21st century. What is that? The point of reference is the USSR. First, that it would prevail. And second, that it would correct the mistakes that in their view served almost as sources of self-destruction, particularly in the organization of the masses. This, however, is not a critique of the USSR, considering the long history of U.S. imperialist aggression.

Can a socialist state be built through elections? Without dismantling and repressing the old violent capitalist state and replacing it with a new armed power that can jump-start the socialist development and protect it?

We remember the tragic experience in Chile. But the Venezuelans do too, and I bet that they have learned from it. Chávez has always said that the Bolivarian Revolution is a peaceful revolution, but not unarmed.

So, since the capitalist state is still in place, enormous difficulties and contradictions have plagued the revolution, which it is important to stress is not socialist yet. But on the other hand, as a progressive, anti-imperialist revolution which has socialism as its goal, it has lasted for 14 years. So, let us take a brief look at what has helped to maintain it.

The first thing that Chávez did was to re-establish the constitutional framework and engage the people in the drafting of a new progressive constitution. This helped to start some changes that eventually chipped away some of the political power from the capitalists. The main source of income, the oil, was rescued and its enormous profits went to establish social programs for the benefit of the masses. Then there was the nationalization of banks and of some industries.

There was also the establishment of workers’ control in some companies.

The organization of the working class to take power is crucial.

Chávez has been presented in the capitalist media as a “dictator.” Right now he is the only political figure able to galvanize the masses and push forward the revolution, but he knows that has to change. And since the very beginning of the revolution he has encouraged the organization of the masses. Remember the Bolivarian Circles? A constant in the revolution has been organization at the base. And a great deal of discussion and debates.

Now, after the last election, the agenda is to deepen the revolution, towards socialism. For that there is the second national plan for socialism. They are programming assemblies all over the nation to engage the people in a great discussion about how to go forward. This is crucial. They are establishing “comunas” (communes). In neighborhoods, in workplaces, everywhere.

There are dangers, within and without. We should be on the alert to the dangers posed by the Venezuelan opposition and U.S. imperialism, which has been working incessantly to overturn the Bolivarian Revolution. It aligns with the pro-imperialist oligarchy and aids the counterrevolutionaries through nongovernmental organizations, etc. There is a high presence of U.S. and Israeli intelligence at all levels ready to whip up dissent and malicious criticism of Chávez and the process.

For us in the center of imperialism, it is crucial to defend this tremendous development, which has ignited a new wave of resistance to imperialism, and above all, sparked the flame, the passion, for a just society where the wealth belongs to the people. Defending this development is to defend the struggle for socialism.