Baltimore — There was excitement in the air as people gathered in Baltimore on Dec.15 for the first National People’s Power Assembly focused on stopping police brutality and fighting for livable-wage jobs or income.

Participants came from around the mid-Atlantic region and North Carolina, and as far away as Illinois and California. Others came from Baltimore, where more than 14 people have been murdered by police since January.

The Rev. Cortly “C. D.” Witherspoon, president of the local Southern Christian Leadership Conference and an initiator of the Baltimore PPA, spoke of the community struggles against this scourge of police terror that has devastated neighborhoods. This working-class city, where recreation centers have been shut down, now faces closure of 26 schools.

Two previous People’s Power Assemblies, in June and October, mobilized police brutality victims’ family members. These included relatives of Anthony Anderson Sr., killed by police in September as his three-year-old granddaughter watched. Many speakers at the national gathering put to rest the official lie that cases like Anderson’s were “isolated incidents.”

Baltimore PPA organizer Sharon Black, who co-chaired the session with Witherspoon, spoke of the group’s origins from a 10,000-person protest over the killing of African-American youth Trayvon Martin that shut down downtown Baltimore for four hours. “It showed what we could do if people were mobilized, including taking over City Hall and running it. We may not be at that point yet, but this movement is long overdue,” said Black.

Opening remarks were given by Nakia Washington, whom Witherspoon introduced as a modern-day “Fannie Lou Hamer.” Washington, whose fiancé was shot six times execution-style by police, challenged those gathered to organize and “yell for justice, over and over again.” She asked, “What type of monster is capitalism when prisons are privatized? You better know they are going to try to fill them up with our children.”

Richie Armstrong, an organizer for Community Churches United, spoke of the fight for inclusion of Baltimore’s oppressed workers in major, multibillion-dollar construction projects around the city. He noted that only 2.5 percent of the jobs at three John Hopkins University projects went to Baltimore residents. Although 1,500 have been trained to do construction work, only three have been hired.

Larry Hales, a People’s Power Assembly organizer from New York, expressed deep sadness for the 20 children killed the day before in Connecticut. He also cautioned that while we mourn these children, we have to say that the lives of Palestinian children, or children killed by U.S. drones in Afghanistan and Pakistan, are no less valuable. 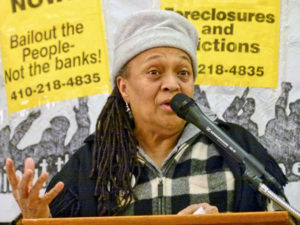 Hales stated that while the media might portray the young shooter as “evil,” the Koch brothers and the Waltons, owners of Walmart, are the real examples of evil, getting rich off the backs of their workers and letting workers die in their Bangladesh factories. “They and Bill Gates not only take all the wealth workers create, now they want all the money from public treasuries.”

‘Fiscal cliff’: a cover for austerity

Hales said the ominous “fiscal cliff” is really a cover to implement austerity programs like those spreading across Europe. He pointed out, “They want to strip away all the union rights so they can pay the workers half what they are making now. We can’t wait for the people elected on Nov. 6 to do our bidding. If we want something, we have to fight for it.”

Larry Holmes, a national People’s Power organizer, also addressed the hypocrisy of the media’s concern for children in the wake of the Sandy Hook Elementary School shootings. He noted, “There’s a war on children right here in Baltimore where their lives have been snatched by police, their schools closed, and nutrition and school lunch programs cut. Capitalism is the biggest killer of children around the world. Poverty kills more children than any bullet does.”

Holmes noted that 2013 will be the fiftieth anniversary of the Rev. Martin Luther King’s historic Poor People’s March. He challenged those gathered to lay claim to the anniversary by demonstrating to defend workers’ rights and demanding that youth are entitled to jobs, not jail cells.

“On Jan. 21, let’s see what we can do to inaugurate a year of revolutionary mass struggle to build People’s Power Assembles all around this country,” stated Holmes. “Let’s reignite the campaign King started for jobs and a living wage for everyone by going to D.C. and shutting it down until we win our demands.” The assembly passed a resolution supporting this proposal.

The highlight of the day was the arrival of workers from the OUR Walmart campaign and their union supporters from the Food and Commercial Workers union. Cindy Murray, a 13-year Walmart employee, described the company’s total lack of respect for its workers. She and co-worker Alan Forest described Walmart’s systematic attempts to intimidate anyone who is even talking about unions. “We have no benefits, and they pay us so little that the taxes we pay end up coming back to us as public assistance,” Murray said.

Murray told of the importance of the solidarity shown by 450 people from many unions who came out to support the Maryland Walmart workers’ walkout on Black Friday. She also described meeting two of the Bangladeshi garment factory workers whose co-workers were killed in the fire. “They didn’t have to die. Walmart just decided not to sign the papers to make it a safer industry,” she emphasized.

Attorney J. Wyndal Gordon, who is handling legal action for the Anderson family, introduced several members of the slain grandfather’s family. He noted that two of the three police officers responsible for Anderson’s death, who remain on the job, had previously been sued, which cost Baltimore more than $400,000. The PPA passed a resolution to support a Dec. 16 protest demanding indictments of the police who killed Anderson.

Other speakers testified with first-hand accounts of police terror. Marcella Holloman’s mentally ill son, Maurice Donald Johnson, was killed by Baltimore police at home on May 19, after she called for an ambulance to take him for treatment. Carletta Kiah, who lives near the Anderson family, told of her brother, Leontey Kiah, being shot multiple times by police in September.

North Carolina activist Lamont Lilly relayed the story of U.S. Navy veteran Stephanie Nickerson, who was brutally beaten by Raleigh/Durham police in October after asking the police, who tried to search for someone in her home, to first show a warrant.

Dr. Jahi Issa, a University of Delaware faculty member, was arrested in March at a rally while supporting students who were confronting white supremacist threats on campus. Issa spoke of growing reports from all over the country that say the deaths of Black people authorities have labeled “suicide” were, in fact, lynchings.

Teresa Gutierrez, of the May 1 Coalition in New York City, called on the PPA to link the struggles for immigrant rights with other movements for jobs and against mass incarceration. “Just imagine such a united movement. It would be millions of people,” said Gutierrez. She asked the PPA to call for People’s Power Assemblies and marches around May Day 2013 and to commemorate the centennial death of freedom fighter, Harriet Tubman, for upcoming International Working Women’s Day.

LGBTQ activist the Rev. Meredith Moise with Black Pride denounced the recent Maryland ballot initiative Question 7 that would expand gambling casinos by promising more money for schools. Despite the bill’s passage, 26 Baltimore schools will be closed. Moise said the people who bankrolled the pro-casino initiative were the same who tried but failed to stop passage of Maryland’s marriage equality act.

Zaina Alsous, a Palestinian woman and youth organizer from North Carolina, spoke out against zero-tolerance policies in schools that push students into the school-to-prison pipeline. While African Americans are only 13 percent of the population, 34 percent of the students suspended under these policies are Black.

Pam Africa, a leader of the International Concerned Family and Friends of Mumia Abu-Jamal and the MOVE organization, praised the efforts of PPA organizers in bringing diverse struggles together. She stressed, “We have one enemy — corporate America. What we are having here today needs to be ­multiplied.”

Several union activists addressed the assembly. Tom Dodge, Maryland postal worker, urged people to support a holiday greeting card campaign asking President Barack Obama to veto any bill that would privatize the post office. Postal workers will be gathering for an emergency encampment in Washington, D.C., across from the White House from Dec. 17 to 22 to demand that the Congressional lame duck session halt the closures and cuts to the U.S. Postal Service.

Mishu Blum and Denise Sidbury, hotel workers and UNITE HERE Local 7 organizers, described their fight against the Hyatt Regency Inner Harbor Hotel that is firing full-time workers and replacing them with temporary housekeepers at $8 per hour — three-fifths of what union hotel workers make.

Everyone left the assembly determined to build people’s power.