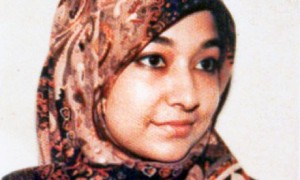 Workers World: What was the aim of your trip to Pakistan?

Sara Flounders: The trip focused on exposing U.S. crimes, meaning the government’s violations of due process and justice in the case of Aafia Siddiqui and also U.S. practices of secret renditions, illegal confinement and torture — practices highlighted by Siddiqui’s case. It also confirmed that there is deep opposition across the whole political spectrum in Pakistan to the U.S. use of drones to carry out assassinations in the region.

Cynthia McKinney was the other person from the U.S. on the trip, participating in every meeting. She has been an opponent of U.S. wars at every step.

The Pakistani forces — and they are numerous — who support Aafia Siddiqui also want to bring pressure upon the Pakistani government so that it too demands of the U.S. that she be returned to Pakistan. That is what millions of Pakistanis want.

Political parties were signing a pledge in the Parliament that they would take a stand opposing the release to the U.S. of anyone in Pakistan’s custody until Aafia Siddiqui is returned to Pakistan. The U.S. Congress is so arrogant that they demanded that Pakistan release Dr. Shakeel Afridi, the jailed CIA informant, to the U.S., while of course they are silent on the U.S. holding a kidnapped Pakistani woman, Dr. Aafia Siddiqui.

WW: Two weeks ago we covered your stop in Karachi. How much support does Aafia Siddiqui have in the rest of the country that you visited?

SF: Our trip to Peshawar — which is drone territory — and Lahore confirmed what we saw in Karachi, each time more strongly, that the kidnapping of Siddiqui, her 10 years in prison, her secret detention and trial are a deeply felt emotional issue in Pakistan.

We drove from the capital, Islamabad, south to Hyderabad. When we were on the road, young people came out in thousands. Our car was surrounded by youths on motorcycles carrying flags with Aafia’s picture on them.

All political currents — and there are hundreds of parties — say they support her return. This includes even those who worked with the U.S., and of course those who opposed U.S. imperialism, and it included the masses in the street, who are for her release in a powerful way. We saw signs on the walls all over, “Free Aafia,” “Free sister Aafia,” “86 years, bullshit.”

People in the U.S. may have gotten used to seeing Congress speak so arrogantly to the rest of the world. Or the U.S. courts treating oppressed people like they have no rights. But the Pakistanis can’t believe what happened to Siddiqui. They asked in every meeting: How it was possible that someone who injured no one could be sentenced to jail for 86 years? Why was a Pakistani citizen brought to the U.S.? How can this be? They asked: How could the U.S. government or some secret agency hold her young children in prison for years? When the children were finally returned to the Siddiqui family, they spoke only English. Average Pakistanis are outraged.

WW: What role did women play in the protests?

SF: We were extremely impressed by the role of women in the movement to free Siddiqui and also at their anger against the drones that are killing their families.

We stopped in a small town just outside Peshawar. The men were on one side of the room, the women on the other. But far from being submissive, the women were passionately involved in the issue, the most militant. They had been to rallies for Aafia Siddiqui and spoke about her as if she were their sister.

In her youth Aafia Siddiqui was the number one high-school student in Pakistan. Her specialty at MIT and her doctorate were on the learning process of children.

Aafia’s sister, Dr. Fauzia Siddiqui, who is also U.S.-educated and was director of the epilepsy program at John Hopkins University, was the main coordinator of the Free Aafia movement and of our trip. I found her to be a skilled political organizer who has built this movement into such a force that every political party in Pakistan has to at least say they support it. It is telling that she has now received death threats. It shows that powerful forces fear the success of this movement.

We were impressed by the Free Aafia media work, which was coordinated by Altaf Shakour. We were overwhelmed by the friendly media coverage. Every newspaper printed front-page color pictures.

And there is a broad range of media, much more variety than in the U.S. There were 100 journalists from all types of media at the events. There were big rallies with thousands of people, after which our motorcades drove past thousands more on the way to the press club. It was a live issue.

We also visited Aafia’s home in Karachi, met with her mother, Fauzia’s two children and the two children of Aafia.

WW: Was there any sign of the war in Afghanistan?

SF: People in Pakistan continually say that Karachi is key to the war in Afghanistan and are for the withdrawal from Afghanistan. People often made the point that Pakistan taught the U.S. a lesson when just months ago the people and the government shut the roads. Today there are lines of trucks going along the roads bringing U.S. equipment back from Afghanistan.

Peshawar, near the border with Afghanistan, is under control of the Pakistani military. We had a huge, huge outpouring of the Pashtun people who are an oppressed nationality within Pakistan. It’s an area of constant war. There, trucks with big sound systems played songs about Aafia Siddiqui in large rallies. There were hundreds of signs.

People referred constantly, with great resentment, to the many U.S. operatives, private contractors and military working within Pakistan today.

The big issues were the drones, the U.S. policy of secret renditions. McKinney spoke a lot also about the U.S. unjust and racist prison system itself, as well as Aafia Siddiqui. People consider the extrajudicial killings with the drones the extension of the kidnapping and imprisonment of Siddiqui.

Nothing shows more the utter failure of U.S. drones than seeing how these totally criminal, extrajudicial tactics have turned a whole population so decisively against Washington. Drones are not such an effective weapon if 95 percent of Pakistan’s population now hates the U.S.

WW: Did you meet with any left forces?

SF: In Lahore, a political center, there was an Institute for Policy Studies, a room with 100 people that was live-streamed to another 25,000. Everyone, even in this Westernized atmosphere, was against drones and for the return of Aafia Siddiqui. Because we were from the U.S. and it was about Aafia, it was intensely watched.

Both religious and left forces support the movement. We had a meeting, for example, with the Awami Workers Party, a new party recently formed by the merger of three workers’ parties. They want to make Aafia’s freedom a workers’ issue. When we left, a Grand Youth Alliance in Pakistan for Aafia with a base on every campus was in formation.