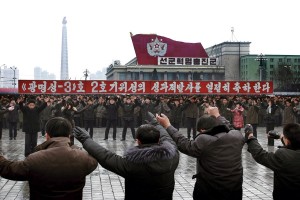 Koreans in Pyongyang, Dec. 14, dance near banner reading ‘We celebrate the launch of the satellite.’

Workers World Party sends its congratulations to His Excellency Comrade Kim Jong Un and the Workers Party of Korea on the DPRK’s magnificent scientific achievement of successfully launching into orbit the satellite Kwangmyongsong-3.

This is further proof that all attempts by the U.S. imperialists to strangle the DPRK through economic sanctions and military encirclement cannot overcome the ingenuity and creative joint efforts of the Korean people to move forward in all areas of development. This success was made possible by the DPRK’s great socialist revolution and the decades of hard-fought struggles to defend your independence and sovereignty.

Deirdre Griswold
For the National Committee of Workers World Party