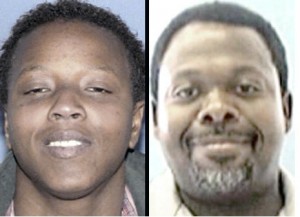 Cleveland — Police shootings of unarmed Black “suspects” are sadly all too common nationwide. But firing 137 bullets to stop a car with two occupants may have set a record.

On the night of Nov. 29, 13 officers chased a car driven by Timothy Ray Russell, 43, from downtown Cleveland through the city of Bratenahl to East Cleveland, a 26-minute chase. Malissa Williams, 30, was a passenger in the car. Both Williams and Russell were killed in what Cleveland’s daily newspaper, the Plain Dealer, called “a fusillade of bullets” on a cul-de-sac behind Heritage Middle School. Police cars were also shot up by “friendly fire,” a clear indication of the police chaos.

The police claimed initially that they were fired upon. But investigators from the Cuyahoga County Medical Examiner’s office stated that no guns or bullet casings were found in the car. A security film showing the beginning of the chase reveals no flash or sound of gunfire. Results of gunpowder residue tests, which should be available, have not been released.

The community has responded with marches, rallies, press conferences, open forums and graveside support. At packed community meetings on Dec. 6 and Dec. 14, sponsored by the Cleveland NAACP, Cleveland Mayor Frank Jackson and other high-ranking city officials, people chanted “No justice, no peace!” The victims’ family members stated that police had murdered their loved ones “in cold blood.”

During a march at the site of the shooting, signs condemned what happened as “lynching.” Walter Jackson, Williams’ uncle, called it “another Rodney King ­situation.”

An East Cleveland resident at the Dec. 14 protest labeled the police action as “Ku Klux Klan mentality.” Connecting the police murders with the tragic massacre of school children in Connecticut, she stated, “This country loves its guns.”

Black on Black Crime founder Art McKoy pointed to the Cleveland Police Department’s history of deadly force, compounded by bias favoring officers in the investigations of these incidents. All 4,427 use-of-force investigations by police supervisors for the period January 2003 to September 2006 cleared the officers involved of wrongdoing. (Cleveland Plain Dealer, Jan. 14, 2007)

The Task Force for Community Mobilization, Self-Determination, Transformation and Community Empowerment, a coalition of more than 35 community groups, sent a letter to U.S. Attorney General Eric Holder asking for a swift investigation of the November shootings by the Civil Rights Division of the Department of Justice. The letter concluded, “We can no longer rely on the police to police ­themselves.”

Groups that make up the Task Force include the American Civil Liberties Union, the American Friends Service Committee, the Carl Stokes Brigade, the Immigrant Support Network, Peace in the Hood, the New Black Panther Party for Self-Defense, the Shurah Council of Greater Cleveland (10 mosques), Black on Black Crime, the Oppressed Peoples Nation, Survivor and Victims of Tragedy, the Hip Hop Workshop and the Council on American-Islamic Relations.

The Task Force, along with the ACLU of Ohio, has requested that Ohio Attorney General Mike DeWine appoint a special prosecutor to head up the investigation, replacing the East Cleveland Police Department and the Cuyahoga County Sheriff’s Office. In its letter to DeWine, the Task Force pointed out: “There were 137 shots including shotgun blasts that were fired into the vehicle after a reckless high-speed pursuit. At what point does a person stop being a danger? One officer fired 30-40 shots alone. He would have had to reload at least twice. That was nothing more than target practice on corpses. Several years ago community leaders, citizens and public officials concluded that the Cleveland Police Department had a pattern and practice of excessive force, civil rights violations and bias involving people of color.”

The Cleveland NAACP has called the shootings “unacceptable and avoidable.” Congress member Marcia Fudge, whose district includes East Cleveland, sent a letter to the Special Litigation Unit of the Justice Department, asking for a thorough and independent review.

At a community forum in East Cleveland’s Shaw High School on Dec. 14, Abdul Qahhar, minister of justice of the Task Force, called for the Plain Dealer to publish the photos of the 13 officers who fired weapons in the shooting incident as “criminal cops who committed murder,” since the paper publishes pictures of fathers behind in their child support payments. Qahhar’s suggestion received enthusiastic support.

Ernest Smith, founder of the Oppressed People Nation, was loudly applauded as he called for the community to take to the streets.

One older African-American man said this is happening in every city in the U.S. He eloquently pointed out that the African people in the U.S. are a captive and brutalized nation and the fightback must take place outside of the rigged “criminal” justice system.

When the meeting ended, people marching to the exits started counting to 137 — the number of bullets fired. Regarding the groundswell of community organizing, Qahhar later declared, “We are kicking ass.”

Martha Grevatt and Susan Schnur contributed to this article.