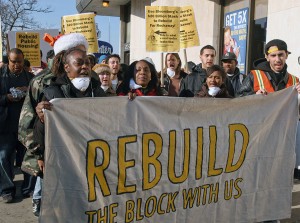 Thousands of people living in New York City’s Far Rockaway and Staten Island areas are still without heat, hot water and electricity. They have to line up for hot meals and food. Toxic mold and residue from Sandy’s surge fill their apartments. On Dec. 15, Occupy Sandy in conjunction with a number of community members called protests, involving marches and housing rehabilitation, in these two communities. This was followed by a gathering in front of Mayor Michael Bloomberg’s posh Manhattan house in the evening.