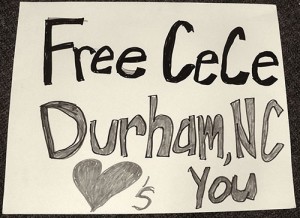 At certain moments in history, the struggle of individuals to survive and organize against fascist attacks, police and prison terror sharply reveals the societal relationship of forces—between oppressor and oppressed, exploiter and exploited. These battles inspire unity and action that help shape and define political eras—like the demands to free the Scottsboro Brothers, Lolita Lebron, Leonard Peltier, George Jackson, Joann Little, Mumia Abu-Jamal.

The struggle to “Free CeCe!” is sparking a growing, broad united front against white supremacy and anti-trans* violence. CeCe McDonald’s courage and consciousness, and the tireless and tenacious solidarity work by supporters in Minneapolis and the region—led by those who are oppressed—has widened and deepened the demand to “Free CeCe!” in cities across the U.S., and around the world.

CeCe McDonald and her friends were assaulted in Minneapolis on June 5, 2011, by a group that announced its ideology as racist and fascist in words and action. The attackers shouted white-supremacist Klan language, transmisogynist epithets, and a slur against same-sex love.

One of the attackers then assaulted CeCe McDonald with a weapon—smashing her in the face with a bar glass that deeply punctured her cheek.

CeCe McDonald was the only person arrested by the police that night. McDonald has been punished ever since as the “aggressor” for defending her life, and the lives of her friends—and surviving. Police, sheriffs, jailers, prosecutor, judge and prison administration have arrested her, locked her up, and held her in solitary confinement for long periods.

Stop the war on trans*/women of color!

It is no metaphor to say that there is a war against trans*/women of color in the U.S.—on the streets and in the prisons.

Here are the names of some of those who lost their lives to anti-trans* lynchings in cities across the U.S. in 2012:

When a trans*/person is murdered, often police and monopoly media don’t investigate or report the deaths. Killers, largely unsought, walk free. Therefore little is known about any possible links between these murders, or any connections the killers had/have with neo-fascist groups, police or military.

CeCe McDonald fought and survived a group fascist attack. She is hailed as a hero—a femme hera—in many communities in the U.S. and around the world.

The continued punishment of CeCe McDonald by police, prosecutor, judge and prison warden is a green light to neo-fascists—on the streets, and in schools, police precincts, prisons and detention centers.

This reporter was told by a survivor of the attack on CeCe McDonald and her friends that harassment and threats by white supremacists continued on the streets of South Minneapolis after the June 5 assault.

Now CeCe McDonald is in a struggle to defend her life in a prison cell, where sadistic white supremacy and transmisogyny hold the key.

“Given this pattern of criminalization and abuse … it is no surprise that most victims of transgender violence (52%) do not report the crimes to law enforcement.”

Hill continued, “[T]rans individuals are subjected to prison sentences during which they will be labeled and treated as a gender rather than their own. Such a practice, if done to straight cisexual individuals, would clearly be understood and challenged as torture.” (ebony.com)

CeCe McDonald wrote from St. Cloud prison to those taking part in Trans* Day of Remembrance 2012:

“We need to not only celebrate for Trans Day of Remembrance, but also become self-aware and ready to put an end to our community being the focus of violence. Of course it is more than important to recognize and pay homage to our fallen, but we also need to put our feet down and start being real leaders and making this stand.

“And personally speaking, if it’s true that this is my personal journey as a leader, I want to lead my troops to victory. I can’t continue to say ‘how bad’ that another brother, sister, mother, father, partner, friend is gone from blind-hatred. From ignorance and discrimination.

“I would have rather been punished for asserting myself than become another victim of hatred.”

CeCe McDonald’s assertion, and her self-defense, are historically rooted in the right—the necessity—to fight back against Nazi, Klan and other white supremacist, fascist terror.

Fighting back against slavery

It wasn’t moral persuasion that overturned the Southern slavocracy on the North American continent. It took many hard-fought, bloody battles.

Freedom fighters—Black and white together—carried out a guerrilla raid on the U.S. Army arsenal at Harper’s Ferry, Virginia, in 1859. They hoped to liberate and distribute weapons and spark insurrectionary uprising against the white supremacist slavocracy.

Copeland wrote that the Civil War in what is now the U.S.: “was, of course, a war against slavery when it did come, regardless of the will of most of its official leaders. …”

Copeland stressed, “The difference between the John Brown raid and the long-fought Civil War was not just in the massive character of the latter as opposed to the allegedly individualist character of the former. It wasn’t just the conventional organization into companies, regiments, brigades, and so on, as opposed to the general guerrilla insurrection almost begun by Brown and Anderson that made the difference.

“The real difference lay in the fact that one conceived of a slave uprising and took the first step in that direction—while the other, although forced to free the slaves in the long run, and forced to enlist nearly 200,000 Black men in its ranks—did not at first contemplate an actual slave uprising, and in fact, opposed it.” (A Voice from Harper’s Ferry 1859, workers.org)

Copeland concluded that the Civil War, “was a revolution that destroyed forever the power of the slaveowners as a class and chattel slavery as a system. But … [t]he ending of slavery as an institution, as is well known, did not lead to any real amelioration of the actual conditions of life, particularly the economic conditions, for the vast majority of the Black people at that time.”

The former Southern slavocracy created and armed the Klan as a weapon of terror and murder after the Civil War.

“The Klan would not be a problem worthy of discussion if one were to judge it merely by its numbers, which are conceded by all sides to be rather insignificant,” WWP founder Sam Marcy wrote.

“The far more important problem is the reciprocal relations between the capitalist government and the Klan.”

Marcy stressed, “[T]he durability of the Klan rests on solid long-term bonds to the state, and that the two share a common political ideology, for the most part.”

Today’s U.S. ruling class, “had the opportunity to wipe out the Klan more than a century ago,” Sam Marcy continued, but “it failed to do so.” (“The Klan & the Government: Foes or Allies,” workers.org/marcy)

After the Civil War, Sam Marcy emphasized, “The Northern industrialists and bankers were more interested in reaching a compromise with the ex-slaveowners than with the newly freed slaves.

“The U.S. government capitulated to the Southern planters and ex-slaveowners after the period of Reconstruction when it withdrew federal troops from the South without establishing an independent citizens’ militia composed of the Black people and poor whites.

Marcy continued, “It also left them politically defenseless and deprived the Black population of economic power by failing to grant the newly emancipated people the land which they had tilled for centuries. …”

“It was in this period that lynchings, the most barbarous form of counter-revolutionary terror, became the hallmark of the reactionary attempt to keep the Black people in semi-bondage,” Sam Marcy concluded.

Ever since the violent dismantling of revolutionary Black Reconstruction after the Civil War, the police, in large numbers, are called out to protect the right of white supremacists and fascists to assemble and publicly make their call for racist genocide.

When police attack, their force is always directed at those protesting the Klan.

Over the decades, millions have taken to the streets in movements for national liberation and immigrant worker rights, against white supremacy, patriarchal class rule and anti-LGBTQ/+ oppressions.

They have answered which social force has the ability and willingness to fight white supremacist lynch-law terror—chanting in unison:

The growing demand to “Free CeCe McDonald!” also defends the right to organize and fight back against white supremacist, anti-trans*, anti-woman violence—on the streets, and in jail/prison cells.

(Sources: The Root, theroot.com; “Transrespect versus Transphobia Worldwide” research project, transrespect-transphobia.org; The Guerrilla Angel Report, lexiecannes.wordpress. All quotes from CeCe McDonald along with more information on her case can be found at supportcece.wordpress.com)

Leslie Feinberg faces an upcoming jury trial in Minneapolis on a charge of 3rd-degree Gross Misdemeanor Property Damage charge for a June 4, 2012 action in solidarity with CeCe McDonald.