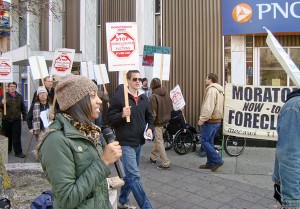 Led by students from the University of Michigan, protesters picketed Dec. 1 at the PNC Bank in Ann Arbor, Mich., demanding that Jerome Jackson’s home not be foreclosed and he be evicted from it. PNC, working on behalf of federally owned Fannie Mae, is trying to put Jackson, who uses a wheelchair due to paraplegia, out on the street after Wayne County went back on its agreement to pay part of his mortgage.

The Moratorium NOW! Coalition to Stop Foreclosures, Evictions and Utility Shutoffs, along with Wayne County Commissioner Martha Scott, has called for a public meeting on Jackson’s case on Dec.18 at 1 p.m. at the Guardian Building (which houses the Wayne County offices), located at 500 Griswold in downtown ­Detroit. For more information go to ­moratorium-mi.org.