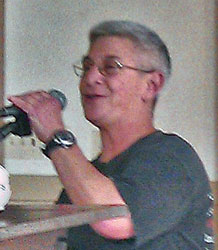 A standing-room-only crowd came out to the Berkeley Fellowship Hall on Dec. 2 to hear eyewitness reports of a visit to Pakistan in October by a delegation of 34 U.S. anti-war activists. They had met with anti-drone activists and relatives of the 760 civilians murdered by U.S. drones.

Speaking at today’s meeting were Joe Lombardo, national co-coordinator of the United National Antiwar Coalition; Leah Bolger, national president of Veterans for Peace; and Toby Blome and Dianne Budd of CodePink, the group that initiated the Pakistan visit.

All the speakers exposed the inhumane U.S. military policy of sending drone missiles to murder and maim the Pakistani people. Bolger talked about the frequent protests against drone attacks in Pakistan. “All military-aged males are considered enemy combatants and legitimate targets for drones,” the Vets for Peace activist noted. “The U.S. has no idea who is being killed.”

Lombardo, the UNAC representative, talked about the domestic U.S. war against the Muslim community and recent government-inspired frame-ups of Muslim activists. He talked about the case of Aafia Siddiqui. “In Pakistan, this woman is a hero,” Lombardo explained. He explained that her case is tied together with the national campaign against U.S. drones. The slogan “Free Aafia — Stop Drones” was quite visible during a slide show of Pakistani anti-U.S.-war demonstrations.

A national campaign against U.S. drone makers was announced. Activists from around the country have already been blockading and committing civil disobedience at the gates of these warmakers.

The San Francisco Bay Area tour includes several speaking engagements in the East and South Bay. For more information about the campaign to stop the U.S. drone war, contact CodePink, Veterans for Peace or the UNAC. A special website called droneswatch.org is being set up to orchestrate this campaign.