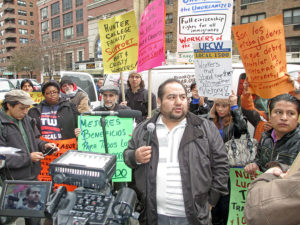 At a press conference called by the Laundry Workers Center on Nov. 16, Hot & Crusty workers announced that they will return triumphantly to their workplace at 63rd Street and Second Avenue on Dec. 17 after an 11-month struggle and a 56-day strike for their rights. Now represented by the Hot and Crusty Workers Association, the courageous immigrant workers won a historic, precedent-setting three-year contract that includes a wage increase, paid vacation and sick time, a union hiring hall, and seniority, grievance and arbitration procedures. Mahoma Lopez, who has worked at that H&C shop for seven years, said this struggle was about “workers having a chance to be leaders.” He noted that the workers are especially excited about the hiring hall because “now we can control who gets hired.” Lopez added that they were victorious because “we’ve received a lot of support!” That was affirmed by the numerous solidarity statements by union representatives who had rallied behind the struggle. The press conference ended with the chant: “There are no borders in the workers’ struggle! ¡La lucha trabajadora no tiene frontera!” A victory party for the workers and a fundraiser for the Laundry Workers Center will be held Nov. 29 at the Solidarity Center, 55 West 17th St., Manhattan, from 9 to 11 p.m. For more information, call 212-633-6646.

The bakers who make Twinkies and Wonder Bread went on strike Nov. 9 to protest draconian concessions demanded by Hostess Brands. But the company, already in bankruptcy, retaliated Nov. 16 by filing to liquidate and throw 18,500 workers out of work. Hostess claimed the strike forced them to shut their doors, which corporate media have reported ad nauseam. But the Bakery Workers union (Bakery, Confectionery, Tobacco Workers and Grain Millers) exposed the real reason: the company is drowning in debt — after years of flagrant mismanagement and an earlier bankruptcy. The bosses were so brazen, they gave themselves huge bonuses only days before the second bankruptcy. But the bakers refused to bail them out as they had done before. According to David B. Durkee, the union secretary-treasurer, the workers were advised that they would be “facing liquidation in 12 to 16 months from now, even if we took more concessions.” (New York Times, Nov. 20) After the bankruptcy judge ordered mediation Nov. 19 between Hostess and the union, he agreed Nov. 21 to let the company sell off its brands to the highest bidders for an estimated $1 billion. (Bloomberg News, Nov. 26) And many baking companies, including Pepperidge Farm, Flower Foods and Grupo Bimbo, as well as financial investors, are eager to buy the popular brands. But what will happen to the workers and their unions? Stay tuned.

After not being paid for three weeks, more than a dozen workers at the Sunny Day Car Wash in the Bronx, N.Y., walked off the job Nov. 11. Later that day they were fired. After consulting workers at the nearby Webster Car Wash, who had just joined the Department Store union (RWDSU), the mostly immigrant workers called an unfair-labor-practice strike on Nov. 13 to demand back pay, their jobs and union recognition. “We’re tired of this. We’re working in the cold. We need money to pay our rent,” Nelson Aquino told the Nov. 13 Daily News. Aquino earns $5.50 an hour plus tips drying cars. “Even when they give us a check, it bounces because there’s no funds.” This was the first strike in the WASH New York campaign, a joint effort of Make the Road New York and New York Communities for Change, supported by RWDSU. With 5,000 low-wage, mostly immigrant workers at more than 200 car washes in New York City, the industry is known for exploiting its workforce, paying below minimum wages and not paying overtime. Workers at two car washes voted overwhelmingly to join RWDSU in September.

Print and digital workers at the New York Times, including writers, and other editorial and administrative staff represented by The Newspaper Guild of New York, Communication Workers Local 31003, voted to ratify a three-year contract on Nov. 13. During a 21-month struggle, which included several public statements (saveourtimes.com) and a picket line on Oct. 25, the workers battled major concessions on wages, pensions and health benefits. The Sept. 24 open letter to management called the cutbacks “untenable and destructive.” Like many newspapers in the U.S., the NYT has been losing money for years, a combination of sharply reduced advertising and subscription revenue, and millions spent developing its website. Adopting capitalism’s worst anti-worker tactics in this dead-end economic crisis, management tried to make the workers pay, while lavishing generous salaries and bonuses on top-tier management, which the Guild denounced. The new contract retains a defined benefit pension plan, increased overall compensation and, for the first time, a bonus plan starting in 2014. (NYT, Nov. 14) This is yet another example of why it pays to fight back.

The 1,300 highly skilled workers at American Crystal Sugar, located in Iowa, Minnesota and North Dakota, have been locked out for 15 months because the bosses refuse to pay them a fair wage and want to break their union. Meanwhile, ACS hired untrained replacement workers. No wonder inspectors from Iowa’s Occupational Safety and Health Enforcement division issued nearly $50,000 in fines Oct. 9 after finding serious safety violations — a dangerous buildup of combustible sugar dust. That’s what caused a 2008 explosion at Imperial Sugar in Port Wentworth, Ga., which killed 14 workers. To support the workers, sign a petition demanding that ACS immediately end the lockout at tinyurl.com/d9yhymu. n