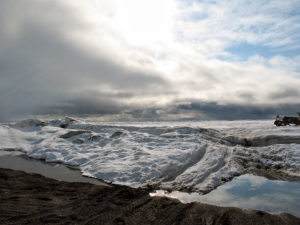 The Chukchi Sea, a section of the Arctic Ocean off northwest Alaska, in May 2008. By July most of the ice was gone.
WW photo: Paddy Colligan

After superstorm Sandy we think “climate change.” It is back in the headlines. But people in the Arctic have been noticing changes and coping with them for many years. Now, sharp shifts in weather are occurring in the Arctic, where ice and snow are an important part of life. These changes affect transportation and food, making life much more difficult for Indigenous peoples in the North.

At the end of summer 2012, satellite views of the sea ice cover over the Arctic showed that it had shrunk to the minimum extent since records have been kept. It is not easy to measure the ice cover at the pole because it constantly moves, breaks apart, and jams together; it wasn’t until satellite photography made possible consistent annual snapshots of the Arctic ice that sea ice extent could be tracked.

Measurements of ice thickness have confirmed what the satellite pictures show — much of the ice cover is now comprised of single-year ice and is no longer the thicker, multiyear ice that did not melt away each year. This makes the ice more vulnerable to breaking up in storms, leaving the ocean surface itself exposed, as occurred this August.

Northern Aboriginal communities in Alaska are not connected to the road grid that services the rest of the state. Instead, they are dependent on planes, an occasional summer marine barge or winter ice “roads” for all supplies and transportation. A frozen surface makes winter travel into the interior possible, but the shortening of the cold season and the melting of permafrost are impacting these vital links. By summer, when the snow is mostly gone from the tundra, this fragile ecosystem is highly vulnerable even to personal all-terrain vehicles. Thawing permafrost makes travel there even more problematic.

Changing climate has resulted in increasingly violent fall storms that are tearing at the coastline and literally destroying coastal communities. For millennia, First Peoples in the North have depended on the sea for their subsistence. They have built their communities on the coast to be close to their food supply. A painful example is the Inupiat community on the barrier island of Shishmaref on the Chukchi Sea (part of the Arctic Ocean). Despite the community’s efforts to relocate their centuries-old village, they continue to lose land and buildings to severe erosion while struggling to find the funding needed to move.

Food supply and communities in danger

The hunting of sea and land mammals supplies a significant amount of food for many Aboriginal people in northern Alaska. Communal whale hunting is done miles off shore from the ice edge in spring. Just a few years ago, this hunt took place in April or May, but now it is done in February and March. The ice now thins weeks earlier, affecting whale migration and making the ice itself dangerous for hunters and their equipment. Two years ago, a whale that was successfully landed in the traditional whale hunt in Barrow, Alaska, was then lost when the ice gave way. While everyone got to safety, tons of much-needed protein and fat were gone.

In the interior, permanent snow patches and lakes are disappearing. The permanent snow patches were a reliable and preferred source of fresh water for people and also served to attract the occasional caribou that would roll in the snow to get relief from mosquitoes and flies. This would present an opportunity for a lucky hunter outside of the caribou migration area to locate solitary animals on the vast landscape.

Migrating birds are an important resource for Indigenous Peoples in the North. The world’s migrating bird flyways originate in the Arctic. Many species of waterfowl nest on the tundra, taking advantage of the concentrated burst of insect and plant life each summer. As the lakes shrink and disappear (the melt water seeps into the thawing soil like water flowing from a bathtub), the availability of food for the birds is changing, affecting migration patterns.

The effect of huge floating ice floes as well as shore fast ice has meant that the Arctic is different from other oceans. Waves that are associated with oceans in lower latitudes have not been present for most of the year. Besides keeping the eroding power of the water in check, the ice cover has meant that the bands of ocean water did not mix vertically. Now, as the ice cover has melted, however, more wave action is present and the colder fresh water layer on top is now mixing with warmer salt water below, accelerating the surface melting process.

A major threat to the Arctic’s human and animal occupants is the determination of huge energy corporations to recklessly prospect for oil profits. The presence of powerful outside economic forces challenges both the environment and the culture of the Northern First Peoples’ communities. The vulnerable communities are also in danger of being destroyed by the double whammy of these powerful forces.

Colligan worked as an archaeologist at Point Barrow, Alaska, or Nuvuk, in 2008 and 2009.