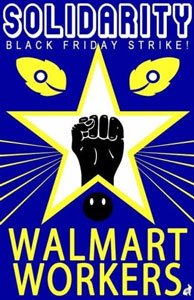 This is part of a national campaign to organize Walmart, which is headed for a national strike against Walmart on “Black Friday,” the day after so-called “Thanksgiving,” when retail monopolies like Walmart rake in billions of dollars in sales from workers’ small paychecks. The Food and Commercial Workers union, along with Working Washington and OUR Walmart, are organizing for the strike locally.

Walmart workers’ supporters from unions and community groups showed up early on Nov. 15 to leaflet the Federal Way store. The cops’ order to leave the premises was soon overruled by dozens of Walmart workers pouring out of the store.

Striking workers from three other Walmart stores, including a Sams Club, also came out.

Workers chanted in the store and then led a crowd of 300, including a marching band, across the parking lot. People chanted, “Stand up! Live better!” and “We’re fired up, won’t take it no more!”

Elena Perez from UFCW read off the names of the many labor and community groups supporting the Walmart “associates” (the term the corporation uses instead of “workers”). The workers spoke out loudly against the company’s harassment and attempts to intimidate their organizing campaign.

Associate Sara Gilbert spoke of overcoming company fear and intimidation and going to Bentonville, Ark., to protest at Walmart’s corporate headquarters. Leaders from SPEEA/IFPT — the International Federation of Professional and Technical Workers at Boeing — presented the Walmart campaign with a $2,000 check and made a strong solidarity statement along with others.

This early walkout by oppressed, low-paid workers, many of them workers of color, is a sure sign of things to come.