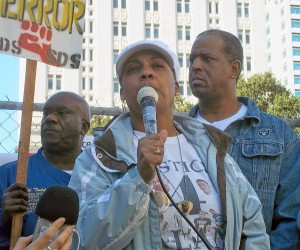 Jeralynn Blueford speaking, with Adam Blueford behind her on the right.
WW photo: Judy Greenspan

Oakland, Calif. — “We just commemorated the six-month anniversary of my son’s death. I am here today to speak for Alan Blueford. We are all Alan Blueford!” The powerful voice of Jeralynn Blueford, Alan’s mother, rang out across Oscar Grant Plaza — the site of countless demonstrations against police brutality, war, racism and injustice — as she greeted the crowd of 500 activists who came out Nov. 10 to protest her son’s murder by the Oakland Police Department. Blueford’s mother urged the crowd to redouble their efforts to win justice for her son and for all victims of police violence.

On May 6, an OPD police officer drove up to a group of three young African-American men without his lights on. Blueford was alarmed and tried to run away. After chasing him for five blocks, the police shot Blueford dead in the driveway of a family celebrating Cinco de Mayo.

Since Blueford’s murder, the OPD has done everything to obstruct the truth, including fabricating a gun battle between Blueford and the police. It turns out that the only bullets fired were by the police officer himself, including the one he shot into his own foot. The family has been continually lied to by police and city officials, and the story has been misrepresented in the major media.

Other family members attended the Nov. 10 rally, including Adam Blueford, who just returned from an East Coast speaking trip about his son’s case. The Bluefords spoke in New York City and Philadelphia, drawing large crowds at the height of Superstorm Sandy. They also traveled with Jack Bryson, a hard-working activist fighting police murder and violence, to visit revolutionary journalist Mumia Abu-Jamal in prison in Pennsylvania. Bryson’s son was with Oscar Grant on a Bay Area Rapid Transit platform when transit police killed Grant in 2009.

Bryson read a moving statement from Abu-Jamal expressing solidarity with the struggle for justice for Adam Blueford. “Mumia told us to organize, organize, and keep organizing,” stated Bryson.

Relatives of other victims of police murder addressed the crowd, including Dolores Gaines, the mother of Derrick Gaines, who was shot down and killed by police in San Francisco while running away from them. “Our teenagers don’t deserve to be murdered in cold blood. It’s not a crime to run, but it’s a crime to commit murder,” she said.

Several union members and activists called upon labor to support the struggle for justice for Alan Blueford and all young people who have been murdered by the police. Gladys Gray of Service Employees Local 1021 told all union members to “put on your union T-shirts. We are calling for all members to support this family.”

Jack Heyman, a retired International Longshore Workers Union Local 10 member, reminded the crowd about the port shutdown three years ago to protest the BART police killing of Oscar Grant and the “general strike” last year led by Occupy Oakland, which also shut down the Port of Oakland. Heyman said, “We have to do this again!”

Following the rally, demonstrators took to the streets and held a spirited march through downtown Oakland, ending back at Oscar Grant Plaza.

The Justice for Alan Blueford Coalition is holding a special program to continue organizing against police brutality “from Oakland and the Bay Area to Anaheim and New York City” on Dec. 18, 7 p.m., at Laney College in Oakland. For more information, visit justice4alanblueford.org.