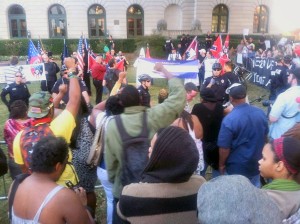 On Nov. 10, the “National Socialist Party,” commonly known as neo-Nazi scum, joined with the Ku Klux Klan to organize a national gathering in Charlotte, N.C. The neo-Nazis from across the country received support and solidarity from the Ku Klux Klan, whose members were dressed in traditional white robes and pointed hat garb. North Carolina residents and activists wouldn’t let fascist, racist and white supremacist voices trump those who fight for equality.

El Cambio, United 4 the Dream and the Latin American Coalition organized a counterdemonstration and successfully “sent in the clowns” and showed Charlotte that, even though they came dressed as clowns, the neo-Nazis with arms raised in the traditional Hitlerian salute and the KKK in traditional dress, still looked more ridiculous than the anti-racists.

Mocking the hooded robes, one counterdemonstrator was dressed as a banana and led a chant, “B-A-N-A-N-A-S, Nazis are bananas!”

Chanting “Racist, fascist, anti-gay, take your hate and go away!” along with “LOL not KKK!” the counterdemonstration successfully outnumbered the neo-Nazis and KKK members approximately at a five to one ratio. Although some believed these fascists should be allowed to have freedom of speech like everyone else, that didn’t stop the protesters from drowning out the hateful speeches with noisemakers, chants and whistles.

Some thought it to be ironic to have three oppressive hate groups in one area at the same time: the neo-Nazis, the KKK and the Charlotte-Mecklenburg Police Department. While the neo-Nazis and KKK spoke of preserving “white civil rights” and claimed that the U.S. is a “white nation” and should only have white leaders, this demonstration reminded us that white supremacy is still alive and well, and that only a fighting movement can fundamentally change the racist, classist system.