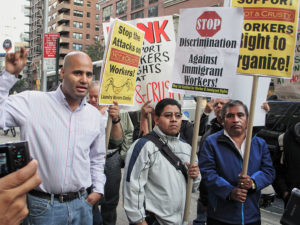 New York — The slogan “Dare to struggle, dare to win” was validated Oct. 26 when the courageous immigrant workers in the Hot and Crusty Workers Association (HACWA) won a hard-fought, 11-month struggle for a collective bargaining agreement. After a 55-day strike at the H&C store on East 63rd Street, the workers won a precedent-setting three-year contract that includes a wage increase, paid vacation and sick time, union hiring hall, and seniority, grievance and arbitration procedures.

Mahoma Lopez, who has worked at the H&C shop for seven years, said all the workers are excited “because this is more than just a contract for us. We are putting an example out there for other workers — and other immigrant workers — that anything is possible when you organize. We want others to take this victory to their own workplaces so we can make change in this country.” (Laundry Workers Center United press release, Oct. 26)

The Laundry Workers Center in New York City, which supported and trained the workers during the organizing campaign, noted, “It has been demonstrated through this campaign that immigrant workers can effect concrete changes when they … lead their own struggles. This is a great victory for the workers, and we … are eager to build on this momentum within our other campaigns.”

Attorney Eugene Eisner, who represented HACWA during negotiations with the new owners of the H&C store, stressed the historic nature of the agreement. It’s “virtually unheard of for low-wage, foreign-born workers in the restaurant industry. These workers should be incredibly proud of their determination to stand up to the employers’ threats not to reopen and … ultimately achieve all of their demands.”

For years the H&C workers prepared and served food and drink under unsafe conditions for sub-minimum wages and zero paid overtime, with some employees working as many as 70 hours a week. Verbal abuse and racist, sexist harassment were rampant. Emboldened by the Occupy Wall Street movement, the workers announced their organizing campaign on Jan. 21 of this year and certified HACWA on May 23. After a successful union election in August, the store’s previous owners announced they were closing the shop in retaliation for the election, so the workers went on strike.

The strikers, who picketed, marched and rallied to get their jobs back, inspired a tremendous outpouring of solidarity. Residents of Manhattan’s Upper East Side signed petitions supporting the strikers — unprecedented in a largely wealthy enclave not usually identified with supporting unions. In addition, nearby Hunter College students and faculty paid daily visits, letters of support came from dozens of unions and labor organizations, and messages of solidarity arrived from around the country. More than 100 labor, community and OWS supporters attended a solidarity rally on Oct. 18, with representatives from at least 15 unions.

The H&C workers’ victory has revived the slogan “Dare to struggle, dare to win.” Let’s hope other workers will be inspired by their example to, as Mahoma Lopez said, “make change in this country.” n