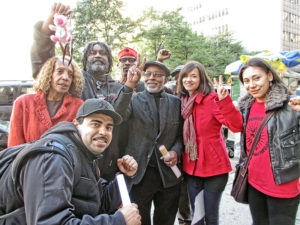 Hayden has been filming the New York Police Department’s illegal stop-and-frisks in his Harlem community. To date this year, there have been more than 600,000 young Black and Latino men stopped, questioned and frisked for just walking, standing, sitting, driving or entering residential buildings because of their skin color, and not in the commission of a crime.

Dozens of supporters representing several social justice organizations rallied in front of Manhattan Criminal Court on Oct. 11 to stand by this Black activist at his hearing and fill the courtroom. They held signs saying “Innocent.” Pressure had also been put on District Attorney Cyrus Vance’s office nationally and internationally. Thousands of people organized and fought to keep Jazz free — and won!

Hayden’s case was adjourned in contemplation of dismissal. He will be on probation for six months and was ordered to do five days of community service. He agreed to plead guilty to the charge of disorderly conduct/reckless driving. He was ordered to pay a $125 “surcharge” for the violation, which he paid upon leaving the courthouse.

Ironically, having already performed “community service” for years via his “cop watch” beat, Hayden will be relegated to “stuffing envelopes” for five days.

The reason for Hayden being stopped and arrested by the cops proved to be highly questionable. The NYPD had no sound basis for Hayden’s case. It was a racist setup, an attempt to silence Jazz and intimidate others who may be exercising their First Amendment right to dissent and film so-called public servants on the job. The D.A. admitted that he had insufficient evidence to support the charges. And it became evident in court that his arrest was retaliatory.

After the hearing, supporters chanted, “This is what victory looks like!” Hayden stated he intends to continue his community activism, exposing the NYPD, and to speak out against police brutality, illegal stop-and-frisks and racial profiling in Harlem and elsewhere.

Hayden repeatedly thanked everyone for their continued support, saying it has helped inspire him to do what he’s been doing. “We must continue to apply pressure to correct the entire system. This is to be our focus. Without a demand and organizing, there will be no justice, no fairness, no change,” he stated. He added, parenthetically, that he witnessed three stop-and-frisks on his way to court. And that he stopped and spoke to the victims, giving them support, and showing them that someone cares. He urged everyone to do the same whenever they witness injustice. For more info, go to allthingsharlem.com.