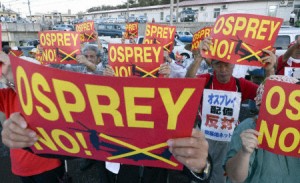 Oct. 1 demonstration in Ginowan, Okinawa, against the deployment of U.S. Osprey military aircraft to U.S. Marines Futenma Air Base in the city.

The spirit of resistance is alive and well in Okinawa. The deployment of 12 U.S. military helicopters to the U.S. Marine Corps Futenma Air Station there has sparked fierce opposition, shown in massive demonstrations and civil disobedience actions.

Even before any MV-22 Osprey aircraft reached the base, activists from the Okinawa Peace Movement Center, labor unionists, youth, seniors and even local politicians were protesting.

Organizers say that 100,000 people on Okinawa Island on Sept. 9 chanted “No Ospreys!” and demanded the base be shut down. Rallies were also held on other islands in the chain, while thousands encircled Japan’s parliament building in Tokyo.

Sit-ins and civil disobedience protests took place during the week starting Sept. 27; some even blocked the gates at Futenma with vehicles, stopping military traffic. On and immediately after Oct. 1, when nine aircraft were delivered, protesters held banners and chanted outside the base.

Okinawans consider the Futenma base to be “the world’s most dangerous base,” as it is situated within the highly populous city of Ginowan. This, combined with Futenma’s high flight accident rate and the hazardous nature of Ospreys, which also have a high accident rate, propelled people into action.

A labor unionist predicted, “If they impose that dangerous thing on us, then all hell will break loose. Enough is enough.” (New York Times, Oct. 1)

Demonstrations are expected to continue. The Okinawa chapter of Rengo, the Japanese Trade Union Confederation, plans to begin gathering 100,000 petition signatures on Oct. 9. Its president, Nobumasa Nakamura, emphasized, “We will unleash more arrows to spread our opposition like a wildfire,” reports The Asahi Shimbun of Oct. 4.

The same article quoted Shutoku Sakihama, 81, a seniors’ organization official in Nago city, Okinawa, who insisted, “We shouldn’t give up.” He said the helicopters shouldn’t become like the 67-year burden of U.S. military bases.

Protests are spreading to remote areas of Okinawa. Activists are calling for an acceleration of their movement to pressure the Tokyo government — which is ignoring their opposition — to act to stop the deployments and oust the U.S. facilities altogether.

This struggle isn’t just about the Ospreys. It’s about the simmering anger at the U.S. military presence, which is opposed by the vast majority of Okinawans. After World War II, the U.S. occupied Okinawa for 27 years, building many bases there, and leading many residents to view their homeland as a “virtual military colony.” In 1972, the U.S. finally loosened its occupation somewhat and returned Okinawa to Japanese government administration.

Okinawa is less than 1 percent of Japan’s land mass, yet today it houses 75 percent of U.S. military facilities in Japan.

Workers World reported on Aug. 15, 2010: “There has been a long and militant struggle to get U.S. bases out of Okinawa. … Especially key to activists is the Futenma [base], one of the largest U.S. bases in East Asia. The U.S. refuses to relocate or close this facility, as it is key to its military strategy there.”

Yet Washington, as well as Tokyo, is taking note of the size, number and militancy of the current protests – and the anger directed at the two governments. There is concern that opposition to the aircraft will grow into a massive movement against U.S. bases — very inconvenient when the U.S. is striving to increase its military presence in the region.

Takeshi Onaga, the mayor of Naha, Okinawa’s capital, opined: “Anger has been building up like hot magma beneath the surface, and the Osprey could be what finally causes an eruption. … If they force the Osprey onto us, this could lead to a collapse of the U.S.-Japan alliance.” (NY Times, Oct. 1)

The struggle continues. Japan Today reported on Oct. 5 that a protester proclaimed, “Our anger over the past 67 years since the war ended is on the verge of exploding.”