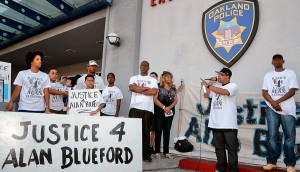 Oakland, Calif. — The Justice for Alan Blueford Coalition (J4AB) held a speakout Sept. 29 at the Oakland Police Department substation in east Oakland, the neighborhood where Alan Blueford, a Black youth of 18, was shot and killed by OPD officer Miguel Masso on May 6. Blueford was a victim of OPD’s stop-and-frisk practices. He was killed for running from Masso, who rolled up on him and three friends who were guilty of no more than “standing on a corner while Black.”

Family and community members denounced the inaction of the Oakland City Council in failing to demand the production of the police report for the Blueford family. Attorney Walter Riley said they “have given up their right to represent the people.” Blueford’s older sister declared, “There’s only one truth. We want the truth on what happened to my baby brother on his last night in this world.”

The crowd erupted in chants of “Truth to power!” and “Justice for Alan ­Blueford!” Drea, one of Blueford’s cousins, said: “In school we learned about genocide as a form of street sweeping. They treated [Alan] like a piece of trash! When I was growing up, we were told police officers are nice. But now in the community, when people see them, they run. Alan shouldn’t have been murdered for running.”

Attorney Dan Siegel declared, “OPD is the most violent, reckless police department in the U.S. They practice what is known as social control. The job of the cops is to harass and intimidate the Black community. We must declare no business as usual and increase the social cost of the war against Black youth.”

Jeralynn Blueford, the slain youth’s mother, brought many to tears as she shared her sorrow: “Every day since May 6, I ask myself can the days get better? … They vilified my son as if he didn’t have any worth to his life. Everybody should be outraged. It’s my son, so I’m gonna be out here. I don’t want any other mother to feel this pain. I’ll make you a promise. We will get justice for Alan! I’m gonna walk and fight and yell until I can’t stand anymore. They try to sweep it under the rug — someone has to pick it up and shake it out.”

J4AB is going back to the Oakland City Council on Oct. 2, after shutting down the meeting two weeks prior, when the Council still wouldn’t produce the police report, five months after Blueford was killed. The Council has threatened to suppress community participation at this meeting, declaring it will shut down the balconies and expel anyone disrupting the proceedings.