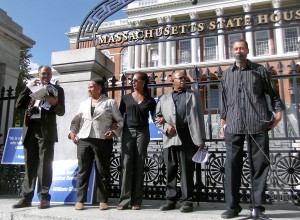 In an alarming epidemic of police killings of African-American men throughout the U.S., the case of Mark McMullen is another tragic example. The 44-year-old was shot to death, unarmed, without cause, in his stationary car in Plymouth County, Mass., on Sept. 7, 2011, by Boston police operating outside of their jurisdiction.

In a shocking but all too familiar cover up, the state police have refused to release important autopsy photos, reports or McMullen’s personal belongings. The district attorney has refused requests by the American Civil Liberties Union, the National Police Accountability Project and others to grant an inquest into his death.

Despite existing evidence that McMullen family members and activists believe contradict the police account, the district attorney supposedly conducted a “hidden investigation” that cleared the police officer who killed McMullen. After more than a year, the Boston police have not communicated at all with slain man’s family.

Civil rights and faith leaders, the McMullen family and other supporters held a rally in front of the Massachusetts State House on Sept. 27, demanding justice. King Downing from the New York City based Human Rights-Racial Justice Project opened the rally, explaining how McMullen’s killing was symptomatic of a racially repressive system, stating,“There are now more Black and Brown men behind bars than there were slaves during the Civil War!”

He was followed by Bishop Felipe Teixeira, Diocese of St. Francis Assisi, Brockton, Mass., who declared, “We cannot rest until we find the answer and justice for those killed by the Boston police in our community.”

McMullen’s sister, Karen ­McMullen, also spoke, urging everyone to sign the petition to District Attorney Martha Coakley, at change.org, urging her to conduct a real investigation of the case with a public report, including missing evidence that can help tell what really happened to Mark McMullen.