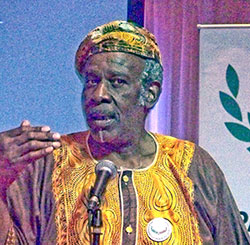 Houston — His name was unusual; he was extraordinary. He said he’d been named after an admired pastor. To chemists, an “ester” is “any of a class of often fragrant compounds.” The fragrant memory of Brother Ester King’s life lifted the spirits of those gathered to honor him a year after he had, according to an African expression, “joined the ancestors.”

The Sept. 22 memorial, which was organized by his daughter, Tandiwe Kone, was one of joy at having been privileged to know such a brother, rather than of sadness all have felt at losing his leadership, knowledge and love. Deloyd Parker, director of the hosting S.H.A.P.E. (Self Help for African Peoples through Education) Community Center, urged all present to “take it up a notch in honor of Ester King.”

It was recalled that King was “a working-class organizer” and a lifetime worker, from school-age summers on a family farm to long years as a boilermaker at a local oil refinery. His family told that this self-taught scholar, after attending Historically Black Bishop College and Texas Southern University, was always reading, sharing knowledge and urging people to learn that which would help free them.

Kofi Taharka, National Black United Front national chairperson, reminded people to follow Brother Ester’s example of studying and researching a situation before deciding on an action. Organizers of the Student Nonviolent Coordinating Committee, with whom King worked in the 1960s, called that “doing your homework.”

Members of King’s extended family talked about him at family reunions, where he brought his dear friend, anti-apartheid activist Omowale Lithuli. The family and Lithuli told “Ester stories” that brought lots of healing laughter to those gathered.

Community activist Ayanna Ade said, “Brother Ester King, whom I have known since I was 17 years old, was a friend, big brother, comrade, teacher and mentor. He was a man of integrity, compassion and fortitude who served as a moral compass to many. I am honored to have worked with him in the Organization of Black Student Unity at TSU, the Black Panther Party and S.H.A.P.E. Community Center.

“Ester valued family and community and fought against injustice. He was consistent and persistent. He leaves the legacy of bridge builder between many progressive communities. His work reflected the belief that injustice anywhere is a threat to justice everywhere. His revolutionary spirit serves as a beacon of light and an example to all. Long live the spirit of Comrade Ester King!”

Human rights activist Marie Brignac met Ester King at a recent Students for a Democratic Society event. She related, “I was inspired to be part of the larger movements that our elders were working with, which led me out to S.H.A.P.E. Center and the [Texas Death Penalty] Abolition Movement. Ester revealed the history of local struggles. The wide knowledge he showed us, plus the dedication and solidarity he displayed, was something that none of the students who met him could forget. We all grew from it and worked to be more like Ester.”

Ester King will live on as a community organizer, in the lives of many activists on so many fronts: in the struggles of his own African-American community in the 1960s for Civil Rights, voting rights and desegregation; on the front lines in the Deep South; fighting “the new Jim Crow,” the new slavery of mass incarceration; and in the movement against state legal lynchings — executions. He was instrumental in bringing people from the African-American community to Texas’ annual anti-death penalty marches.

King saw the oneness of all oppressed people and joined struggles of new immigrants, the DREAMers and the established Mexican/Chicano communities. Ending Palestinian oppression was of special importance to King; he is remembered and loved by the Palestinian community. He was prominent in the successful campaign to prevent the Zionist consulate from having a radio program on Houston’s Pacifica station, KPFT, where he served on its local board and was a regular guest on “Connect the Dots.”

The writer and King were Civil Rights activists who worked with SNCC in Mississippi in the 1960s.