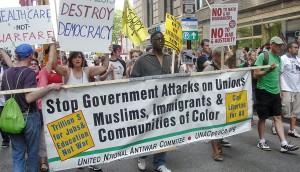 We commend all who rally and march on the Oct. 5-7 weekend to resist the imperialist war drive and say, “U.S./NATO out of Afghanistan!” “Hands off Syria!” “Don’t attack Iran!” “No more drone attacks!” and “No sanctions!” We commend the United National Antiwar Coalition and its constituent organizations who called and coordinated the anti-war actions. They are expressing internationalist solidarity with all those who are victims of U.S. militarism and all those who resist it by whatever means are at hand.

We would like to see a massive popular response from the great majority of people who have no interests in pursuing wars. In any case, UNAC has made an important contribution to struggle and progress by defending its anti-imperialist message and setting the correct tone for all those who oppose the U.S. attempt to reconquer the former colonial world.

And what is the strong message of these anti-war actions? There are two main parts.

The first — and this was agreed upon at UNAC’s national conference last spring — is that no slogans should be raised against countries or governments that imperialism has under attack. This means that the leadership of the anti-war movement sets a tone of resisting the imperialist regime of the country where they live, in this case, U.S. imperialism.

Workers World is clear that the main enemy of humanity is the imperialist U.S., its banks and its Pentagon. Washington’s NATO and Japanese allies are equally ­pernicious, if not as well armed. Thus we will defend any country, people or state under attack from the U.S., NATO or Japan­ese war machines. We will also resist any attempt by the imperialist media to demonize leaders and countries — which is usually a prelude to economic sanctions or military attack by the imperialists.

The anti-war movement’s other strong step is to condemn “the war at home,” to raise slogans like “No to racism, raids and repression” and “No to Islamophobia,” meaning anti-Islam bigotry. The anti-war movement needs to take these stands in order to build solidarity with the workers and the most oppressed and with all those who face the most repression from the state.

An example of this approach — though we’re sure it’s repeated in many cities — is the effort in New York to oppose stop-and-frisk cop actions, to hold the anti-war demonstration in Harlem, and to join the struggle against police brutality to the struggle to stop anti-Muslim bigotry.

What adds to the demonstrations’ significance is that they take place in the midst of a capitalist election campaign. The two major capitalist parties are spending vast sums on political propaganda. These ads at worst promote the most reactionary, racist and anti-working class ideology. Even the least offensive ads aim to keep workers, oppressed peoples and all progressives focused on the ballot box and away from the streets — the only arena for real democratic action.

The movement is thus carrying out these anti-war actions not only against the Republican candidates’ hawkish, racist and xenophobic comments. They are also against the Democrats and Barack Obama administration, who direct the capitalist government and thus are responsible for the drones, the war machine and state repression.

As of Oct. 2, a look at the UNAC website showed there are demonstrations, vigils or meetings scheduled in at least 40 cities in North America and around the world, including in Tehran, Islamabad and London. During the week before Oct. 5, a group of North American anti-war activists — including from UNAC — is in Pakistan joining with local progressives to protest U.S. drone attacks. We applaud these actions and any moves that can expose and disrupt the imperialist war machine.