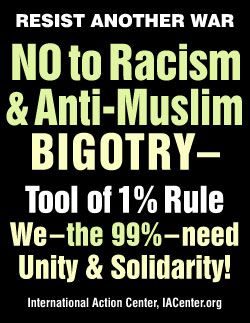 New York — The capitalist media waged a frenzied war campaign against Iran’s President Mahmoud Ahmadinejahd while the United Nations was in session the end of September. This propaganda campaign was designed to create popular support for “regime change” in Iran so that Wall Street can take over that country’s oil resources.

A little before the U.N. convened, the media broadcast stories that the Metropolitan Transit Authority would begin running ads with racist, anti-Muslim slurs to support Israel in 10 subway stations.

The repeated mention of the racist slurs by the media served to promote racism and war. Of course, the MTA denied it was being used for propaganda purposes, claiming it had been ordered by a federal judge to run the ads. If the MTA’s story is true, it would be the first time the transit agency has refused to be used in the bogus war on terror.

In recent years, the MTA has in fact allowed public transit to become strongly militarized. SWAT teams armed with submachine guns and accompanied by attack dogs regularly patrol the subway. Since 2001, the New York Police Department has conducted racist-profiling spot checks of people’s bags and backpacks. Recently the Transportation Security Administration — the airline industry’s notoriously intrusive security agency — has taken over this task in many stations.

Sold as anti-terror tactics, the actual result of this activity is an extension of the NYPD’s racist stop-and-frisk program.

The ugly, anti-Muslim ads were paid for by arch-racist Pamela Geller, who in 2010 tried to stop a mosque from being built in downtown Manhattan. Geller plays a key role for U.S. imperialism by demonizing the people who happen to live over large quantities of oil and whose dominant religion is Islam.

As soon as the racist ads went up, the thriving progressive movement in New York City went into action. Activists placed stickers over the subway ads with slogans reading “Racist” and “Hate speech.” On Sept. 25, writer Mona Eltahawy and three other people were arrested and charged with “criminal mischief” for righteously spray-painting over the ads.

Two days later, the International Action Center protested outside MTA headquarters with placards reading: “The subway belongs to the 99%: Take the racist ads down!” Joined by members of Transit Workers Union Local 100, protesters then went inside for the MTA monthly board meeting.

During the public comments section of the meeting, one by one speakers denounced the hate-mongering ads in what local media later described as a “vocal outburst.” MTA train operator Seth Rosenberg, one of the transit workers who spoke, denounced the ads as “racist, anti-Muslim and vile to the core.”

As for the MTA argument that it was forced to run the ads by a court order, speakers noted that the agency’s board, representing powerful banking and real estate interests in New York City, could have hired lawyers and tied up the issue in court for years.

Of course, Geller didn’t waste the opportunity to promote her bigoted line and showed up to speak last. But the anti-racist crowd used the “mic check” strategy of Occupy Wall Street to drown her out. The MTA’s many security guards rushed to quiet the crowd, briefly arresting protester Caleb Maupin before releasing him a half hour later, and pushed the others out.

IAC Co-Director Sara Flounders said the anti-war group had raised money for its own set of 10 subway ads that read: “Resist Another War: No to Racism & Anti-Muslim Bigotry, Tool of 1% Rule. We — the 99% — Need Unity & Solidarity!”

“It’s important to confront these bigoted attacks that are used to justify U.S. wars in the Muslim world and increased repression at home,” Flounders told Workers World. “Every day, thousands of people use a subway system that has been systematically downgraded and dismantled by the MTA with constant service cuts and fare hikes.

“The average person hates the MTA,” added Flounders. “Anyone who is against racism will hate them even more.”