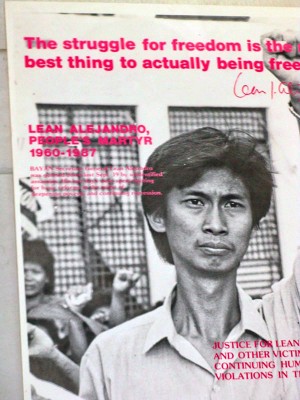 “The place of honor is in the line of fire.” – Lean Alejandro

Sept. 19 — Twenty-five years ago, on 19 September 1987, Lean Alejandro, the first Secretary General of Bagong Alyansang Makabayan (BAYAN), was killed when armed men opened fire with automatic weapons on his car as it was about to enter the gate of the headquarters of BAYAN.

Lean had just come from a press conference at the National Press Club, where he had called for mass protests against the inordinate and increasing say of the Armed Forces of the Philippines (AFP) in the 18-month-old administration of then President Corazon C. Aquino.

Lean’s assassination was one of many grievous human rights violations committed under the first U.S.-backed Aquino regime. While the Cory regime denounced the killing, it remains unsolved to this day.

It is widely believed that the Rebolusyonaryong Alyansang Makabansa (RAM) carried out the dastardly act just as they did the assassination of labor leader Rolando “Ka Lando” Olalia and his driver, Leonor Alay-ay, in 1986, with the objective of strengthening the hand of the rightists and militarists in the Aquino government, if not causing its outright downfall.

Despite the alleged restoration of democracy, widespread and grievous human rights violations blackened the first Aquino regime.  Mrs. Aquino “unsheath(ed) the sword of war” and launched another brutal counterinsurgency program against the communist-led revolutionary movement.  In the process, many civilian communities were displaced and terrorized and many more lives were lost, especially due to the abuses of paramilitary forces such as the Civilian Armed Forces Geographical Unit (Cafgu) under the direction and control of the AFP.

While martial law had been rescinded and the fascist Marcos dictatorship overthrown, extrajudicial killings, enforced disappearances, arbitrary arrests and torture still took place at an alarming rate and frequency. The first Aquino regime continued and even exacerbated the anti-people policies of the Marcos regime, notably in relation to agrarian reform, foreign debt service and economic liberalization, deregulation and privatization.

Mrs. Aquino also called for the retention of the U.S. military bases, reneging on her position when she was not yet president and even marching in a Malacanang-organized rally to pressure the Philippine Senate to vote in favor of bases retention.

It is no surprise that the people’s struggles against exploitation and oppression and for nationalism and democracy continued and even grew in strength.

As we commemorate the death of Lean, we also remember the declaration of martial law 40 years ago and the people’s heroic resistance to the Marcos dictatorship, whose victims continue to seek justice.  Justice remains elusive, as well, not only for the family and kin of Lean, but also for the thousands of victims of human rights violations committed under the first Aquino regime.

In remembering Lean and his unjust and untimely passing, we note the failure of the first Aquino regime and the succeeding regimes up to the second Aquino regime of President Benigno “Noynoy” Aquino, to render justice and indemnification for all victims of human rights violations. Such failure, along with the continuing anti-people policies carried over from one regime to another, fuel the people’s continuing struggle and resistance.

Concretely, the Noynoy regime has failed to deliver on its promise of indemnification for the victims of martial law. It has also not taken any step to release the more than 350 political prisoners all over the country while it had amnestied and set free more than 300 military officials and personnel who had rebelled against the preceding Arroyo regime.

Today, we honor Lean and all our martyrs and heroes who valiantly and steadfastly fought for the cause of national and social liberation. We offer our multisectoral march on September 21 to the memory of all those who fought against the U.S.-backed Marcos fascist dictatorship, as we pledge to continue their unfinished struggle for genuine freedom and democracy.

The writer is the national Secretary-General of BAYAN-Philippines.