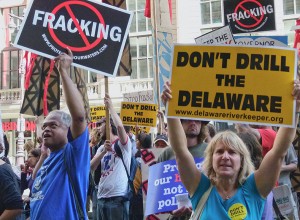 Philadelphia — The shale gas industry is feeling the heat. Major protests have drawn record numbers of participants, publicity and public support, such as in Albany, N.Y., in August and at Shale Gas Outrage 2012 outside the Marcellus Shale Gas Insight Conference Sept. 20-21 in Philadelphia.

On Sept. 21, the pro-drilling Marcellus Shale Coalition announced plans to launch a public relations campaign called “Learn About Shale” to try to repair the industry’s reputation. Pennsylvania Gov. “Toxic Tom” Corbett led the charge by criticizing drilling opponents who, he claims, “don’t understand the industry.” “Pennsylvania is reaping the bounty” from natural gas drilling, according to Corbett. “It is beyond belief that there are still people who would trade this progress for a return to the status quo.” (Philadelphia Inquirer, Sept. 23)

Corbett’s election campaigns benefited from gas industry donations, but for most Pennsylvania families, there is nothing bountiful in the rapid expansion of drilling. For them the “status quo” means having clean well water that doesn’t catch on fire or make family members ill.

Tammy Manning was one of several Pennsylvania residents who spoke out at the Shale Gas Outrage rally about the impact of drilling. She relayed her family’s experience after buying a house located within 7,000 feet of two multi-well drilling sites in the northeastern part of the state.

By late 2011, methane and carbon monoxide were coming out of kitchen faucets and heavy metals were found in their water. Her granddaughter, whose bedroom was above the kitchen, threw up every morning. By March, the air above the water well was 82 percent methane. Despite defects on many gas wells at nearby drilling sites, the gas company tried to portray the Mannings and their neighbors as crazy, gullible and mercenary.

Public officials expressed concern that the industry is “losing the hearts-and-minds campaign in the Philadelphia area to anti-drilling activists.” Secretary of the Department of Environmental Protection Michael Krancer said, “It’s all about disclosure.” However, the natural gas industry has yet to disclose the full array of more than 250 potentially toxic and carcinogenic chemicals contained in hydraulic fracturing fluid.

The industry’s lack of transparency and cooperation was the focus of “The Potential Health Effects of Hydraulic Fracturing” symposium at the College of Physicians of Philadelphia on Sept. 21.

Dr. Robert Oswald, professor of molecular medicine at Cornell University, challenged the gas industry’s claim that fracking has never been proven to contaminate drinking water. He noted that a major problem in scientifically challenging the industry is its failure to disclose the chemicals used and its insistence on nondisclosure agreements in contracts and legal settlements with property owners impacted by drilling activities.

Pre-drilling testing is usually done by the natural gas industry or companies they control, seldom by independent laboratories. The companies own the test results and can chose whether to release them.

Oswald compared the industry’s response to concerns over health problems stemming from fracking to that of the tobacco industry, which for years denied their products’ link to cancer and other health problems. People can’t prove their illnesses are fracking related because the industry blocks access to the data needed to do so.

“Contaminated wastewater from drilling is spread on roads to melt snow; sent to water treatment plants; recycled; or stored in injection wells with limited oversight by an understaffed DEP,” said Oswald. Without rigorous scientific studies, “the gas drilling boom sweeping the world will remain an uncontrolled experiment on an enormous scale.”

“It’s hard to find a group of people in southwestern Pennsylvania who are not impacted,” said Raina I. Rippel, director of the Southwest Pennsylvania Environmental Health Project. “We are all downwind and downstream from gas drilling activity. The debate about whether there are health impacts needs to end.”

Rippel described the scenario: “People are suffering serious quality-of-life issues, with skin rashes, abdominal pain, nausea and vomiting, breathing problems, headaches and eye irritation. But the nondisclosure provision of Act 13 prohibits doctors from even questioning their patients about exposure to drilling. People’s kids are affected, but they are afraid that if they speak out against the industry, they won’t be believed.”

To combat this fear and isolation, filmmaker Kirsi Jansa has been producing a series of short documentaries called “Gas Rush Stories.” Jansa showed documentaries filmed in Germany and southwestern Pennsylvania at an afternoon conference of “fracktavists” on Sept. 21. The films can be downloaded from gasrushstories.com.

Dana Dolney helped launch a “faces of fracking” campaign in 2010 after 11 families in Woodlands, Pa., experienced well water problems stemming from drilling activity by Rex Energy. While the company agreed to pay to pipe water to a multimillion-dollar housing complex, “poor people in Woodlands are told to let their children drink poisoned water,” said Dolney, who maintains a blog called the-league-of-activists.com.

Marilyn Hunt traveled with her family from West Virginia to raise awareness of the double impact that mountain top removal and fracking has had on isolated rural communities. While the Hunt family controls the mineral rights on their 70-acre farm, their property is surrounded by drilling activity.

When area residents began experiencing flu-like symptoms including headaches, sore throats and respiratory problems, doctors told them to drink more fluids, unaware that the problems stemmed from contaminated water wells. When people began to test their water, the gas companies purchased the testing laboratory the residents had used.

With help from a nearby university, residents were finally able to run tests that found hundreds of contaminants in their wells, including acrylonitrile (plastic cyanide), a known carcinogen used in at least three stages of the drilling process.

The gas industry and its politicians can launch all the fancy public relations campaigns they want to hide the truth about natural gas drilling and its horrible effects. But the result will be people like Dolney, Hunt and hundreds of others who will become fracktavists in the struggle for people’s health and environmental wellness.