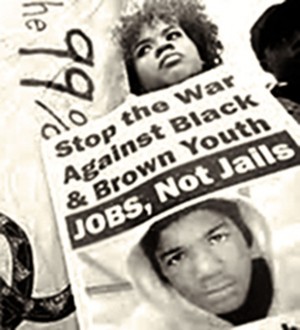 Dinae is a New York activist and organizer in her high school and community. The following article is the first in a series of personal stories from young Workers World Party members describing their political development and their path to becoming revolutionary Marxists.

I first started to think I might be a communist at the end of my freshman year of high school. I was into many activities at the time, including spending time doing community service with a special after-school program. Through this organization I was invited to a weeklong summer leadership camp. I was pretty excited!

The first day, I recognized everyone, including the service project coordinators — except one. This quiet person ended up being Workers World party member Larry Hales, but at the time he was just another participant in the activities to me. I didn’t say anything to him the first couple days. By the second night, I saw that he was wearing a Fight Imperialism Stand Together (F.I.S.T) – a WWP-led youth group – shirt and it caught my attention. At the time, I had no clue what imperialism was, but the shirt stood out because it looked so radical! I got the courage to ask him about the shirt and he began to tell me about F.I.S.T. and it’s ideals, although I had yet to know what socialism actually stood for. I was impressed, but all I knew of socialism was that it was “evil to society.”

From then on, my curiosity grew. When the camp ended, Larry and I stayed in contact. Two months later, I started hanging around the Workers World office, and began to read literature such as “What Is Marxism All About?” “The Communist Manifesto” and “The State and Revolution,” as well as the weekly Workers World newspaper. I absorbed myself in going to demonstrations — as many as 3 or 4 a week — and I loved it!

A whole new side of the world was becoming clear to me. I started to see that the class struggle can allow for greater change in the world, with the ultimate goal being real socialism — a society where everyone’s needs are met. I began to see capitalism as destructive to the people of the world and also how it had plagued my life in malicious ways. Although I faced heavy opposition from some people around me, I decided in December of 2010 to join Workers World Party. I was a sophomore in high school. Joining this party helped me become a better activist. It also has allowed me to make lifetime relationships with amazing people, help fight for basic necessities for my community, and ultimately has changed my life forever!