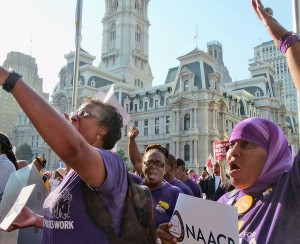 Hundreds of people gathered outside the Philadelphia Municipal Building on Sept. 16 for an early morning rally to oppose the implementation of a regressive voter identification law. The rally was held on the first day of arguments in Pennsylvania’s Supreme Court around the controversial law, which many see as an attempt to reinstate racist Jim-Crow — and poll-tax-type legislation. In August, the Pennsylvania Commonwealth Court refused to grant an injunction requested by the American Civil Liberties Union against the law.

Pennsylvania is among 31 states where restrictions on voting rights have recently been implemented. The law here requires all voters to produce a photo identification card with a current expiration date. Voters who lack a driver’s license, passport or other photo identification must secure a Voter ID card through a Pennsylvania Department of Transportation office.

The law requires voters to produce original birth certificates and Social Security cards. For many voters, particular the elderly, these documents may be impossible or difficult, time-consuming and costly to produce. Obtaining them poses particular hardship for those with disabilities or people who don’t live near a PennDoT center.

Proponents of the Voter ID law have failed to provide any evidence of alleged voter fraud, which is the basis for the law. Pennsylvania State Rep. Daryl Metcaulfe (R-Butler), who sponsored the bill, has attempted to pass other legislation that adversely affects Muslims, African Americans, immigrants and lesbian, gay, bisexual, transgender and queer communities.

The real motivation behind the law was revealed by Majority Leader of the Pennsylvania House of Representatives Mike Turzai. He told the Republican State Committee that the law would allow Republican presidential candidate Mitt Romney to carry Pennsylvania in this year’s election.

The TWU, CWA and NAACP announced the formation of a coalition to protect voting rights. From Sept. 17 until the Oct. 9 registration deadline, all three organizations will mobilize members to hit the streets with registration forms and information on voter ID requirements. n