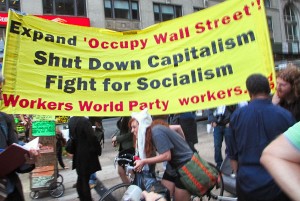 New York — A huge, militant demonstration took place in Manhattan’s financial district on Sept. 17, the one-year anniversary of the Occupy Wall Street movement. More than 150 people were arrested in actions that began at 7 a.m. that day.

For several days prior to the rally, the major capitalist media predicted that the events of the day would be minor, and that the Occupy movement was “fading.” These predictions and proclamations were proven to be incorrect.

The demonstration was highly organized and effective. Four different assembly points throughout lower Manhattan were announced. At 7 a.m., several thousand protesters assembled, mostly youth, and after a few speeches poured into the streets.

One of the four contingents, dubbed the “99% Assembly,” met across the street from Zuccotti Park. The activists proceeded to march down Pine Street, near the back entrance of the New York Stock Exchange. The crowd of more than 1,000 surged into the street, and as the police panicked, glitter bombs exploded, raining confetti and glitter on the crowd.

Placards and signs denouncing capitalism were everywhere. The police violently cleared the street, trying to keep the world financial center running as usual. They failed in their efforts, as chaos and protest erupted.

Raising signs with slogans like “Capitalism is destroying the planet” and “Where is my f—-ing future?” youth withstood police batons and other crowd-control measures. Multiple intersections were blocked off as youth linked arms. When the police charged with clubs, the youth fled and soon blocked other intersections. This pattern was repeated over and over again.

Some intentionally remained in the street in order to get peacefully arrested. Many clergy, including the Rev. Stephen H. Phelps, of Harlem’s Riverside Church, were among them. Others fled, causing New York Police Department officers to chaotically chase them.

Sit-ins took place inside symbolically selected bank lobbies. Police were forced to drag youth out of the banks one by one. The issues of the military-industrial complex, police brutality, hydraulic fracturing, unemployment, education cuts and union rights were raised, as Wall Street became a class war zone for the entire morning.

Justin Wooten, a student at Montclair State University, was violently arrested by the NYPD. He screamed out, “You’re a bunch of terrorists!” at the NYPD as they dragged him away.

Lisa Grab, a member of Students for a Democratic Society, filed a criminal complaint against a police officer after he brutally choked her during the morning’s chaotic events.

Amidst the chaos, many looked up to see a Workers World Party banner bearing the slogan: “Expand Occupy Wall Street, Shut Down Capitalism, Fight for Socialism.” n