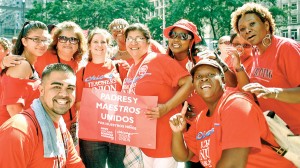 The 29,000 union members, comprised of teachers and support staff, had voted overwhelmingly this summer to go out on strike if their demands for better pay and working conditions were not met.

Chicago has the third-largest school district in the U.S., behind New York City and Los Angeles, with an estimated 350,000 students. The last strike by Chicago teachers took place 25 years ago.

At 5:30 p.m., the Chicago Teachers Solidarity Campaign made an announcement on social media about the afternoon’s solidarity march on the first day of the strike: “Right now downtown Chicago is a red sea that cannot be divided as thousands of teachers and their allies march through the streets in front of and near the Board of Education. The teachers really want one thing, to deliver quality education for fair compensation. It’s really that simple, Mr. Mayor.” Chicago Mayor Rahm Emanuel was President Barack Obama’s former chief of staff.

CTU president Karen Lewis stated in a press release why the teachers were prepared to strike against the Chicago Public Schools: “CPS seems determined to have a toxic relationship with its employees. They denied us our 4 percent raises when there was money in the budget to honor our agreement; they attempted to ram a poorly thought-out longer school day down our throats; and, on top of that, they want us to teach a new curriculum and be ready to be evaluated based on how well our students do on a standardized test. It has been insult after insult after insult. Enough is enough.” (ctunet.com, Aug. 29)

Teachers & community are one 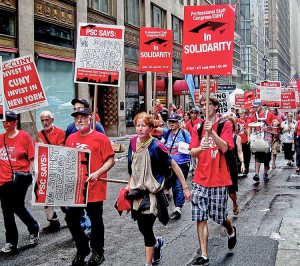 Lewis and other union leaders have made it clear that the union was forced to go on strike and that it is not a strike of “choice,” as Rahm has stated. The teachers’ demands, says Lewis, are tied to broader social concerns for those students who live in poverty, especially Black and Latino/a students. “We have communities that have been neglected for decades, and all of a sudden we’re expecting something to happen in a vacuum. I would like to see a commitment to bringing jobs and grocery stores … back into the communities that our children live in.” (New York Times, Sept. 10)

In typical divide-and-conquer style, the big-business-owned press is attempting to drive a wedge between the teachers and staff and the communities they serve. These dangerous tactics try to give the false impression that the teachers are isolated from the community, when in fact they are an integral part of it.

The Sept. 3 Chicago Labor Day march and rally for “Jobs, Dignity and a Fair Contract” brought out organized labor in the thousands, along with community members and students, mainly in solidarity with the teachers union. Many signs in both English and Spanish had slogans such as “More school nurses, more counselors, more services,” “Teachers make all other professions possible,” “I support teachers because they work hard,” and “If you disrespect my teachers, you disrespect me.” The protest was a strong display of multinational unity among African-American, Latino/a and white workers.

This strike exposes the lie that teachers are “middle-class professionals.” Teachers are among the most underpaid public sector workers. They, like all workers, deserve a living wage, decent working conditions and excellent benefits. Instead, teachers and all workers — and their families — are suffering amidst the most severe capitalist economic crisis since the Great Depression.

Though it may be a defensive one, the Chicago teachers’ strike involves a strong union that has taken a heroic stance against decades-long givebacks, wage cuts and intolerable working conditions.

Workers World pledges its wholehearted solidarity with the CTU and encourages the entire U.S. labor movement, along with community groups and progressive organizations, to do the same in every way possible.

The CTU struggle exemplifies the powerful saying: An injury to one is an injury to all! Their struggle is all of ours.

Moorehead is a former kindergarten teacher and past member of the Virginia Education Association.