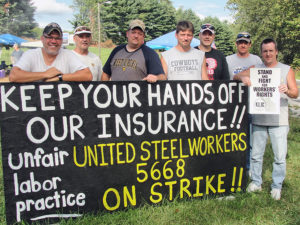 People rallied Sept. 8 in solidarity with members of Steel Workers Local 5668 of Ravenswood, W.Va., who have been on strike since Aug. 5. The aluminum company, Constellium Rolled Products, offered an unreasonable health care, wage and pension plan, which was rejected by over 95 percent of the workers.

Among other issues, the union is objecting to changes the company wants to make to health care coverage that will significantly increase costs to employees and their families. The changes could more than wipe out any wage increases the company has proposed.

The rally featured speakers such as Leo Gerard, international president of the USW, as well as local leaders from other unions such as the Mine Workers, the Communication Workers and the Service Employees. Speakers were followed up with live music from rock, folk, blues and bluegrass performers.

People traveled from other parts of the state, as well as Kentucky and Ohio, to donate food and water. Members of Students for Appalachian Socialism of Marshall University also attended and made a large donation.

Strikers carried banners and wore T-shirts with the slogan, “One Day Longer … Again,” a reminiscent reference to the lockout USW Local 5668 faced from November 1990 until July 1992, when the aluminum plant was known as the Ravenswood Aluminum Corp. Inc., owned by a robber baron named Marc Rich, a convicted criminal who later received a presidential pardon from Bill Clinton. Now, just as during that strike 20 years ago, the strikers have had to physically defend themselves against attacks from company goons and provocative scabs.

Talks between the company and the union are scheduled to occur this week. The strikers have made it clear they are determined to fight until they win a contract.

The union has held various rallies and other solidarity events at Fort Unity, the latest one being a benefit concert on Sept. 8.

Bryan G. Pfeifer, an organizer of the Wisconsin Bail Out The People Movement, stopped by the Local 5668 union hall called “Fort Unity” and the picket lines on Sept. 4 on his way home from Charlotte, N.C. He had spent the summer as a volunteer organizer with the March on Wall Street South and the Southern Workers Assembly.

Pfeifer dropped off donations and United Electrical Workers union signs and buttons gathered in Charlotte. He told WW, “It is inspiring to see the Steel Worker sisters and brothers and their families standing up to corporate greed and the bankers. They are standing firm but still need lots of support to win their justified demands.”