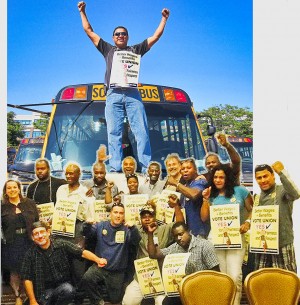 Boston — The bus drivers of Eastern Bus Co. have won the right to join militant Local 8751 of the United Steelworkers. The report of a National Labor Relations Board hearing officer states, “Having recommended that all the Employer’s Objections be overruled, I further recommend that a Certification of Representative be issued.”

Eastern Bus is owned by Chuck Winitzer and operates out of several Boston suburbs: Somerville, Cambridge, Waltham, Wellesley and Belmont. The approximately 90 workers at Eastern Bus have been working under oppressive and illegal conditions. They get no affordable health care or retirement benefits. They have no seniority rights or the opportunity to bid on possible bus routes. They receive no overtime. The workplace environment is fraught with favoritism and arbitrary discipline. The employer shows its drivers no respect — there are not even adequate bathrooms on the premises, as mandated by law.

Local 8751 won a historic contract last December that made Boston’s school bus drivers the only city union in Boston’s school department to have a collective bargaining agreement. Soon after, several Eastern Bus workers approached asking for help to unionize their workplace.

After several conversations, Winitzer agreed to a stipulated election within 14 days. The organizing committee was initially going to organize at the Cambridge and Somerville bus yards; however, Winitzer insisted that Waltham, Wellesley and Belmont be included.

Kirschbaum says this was an attempt to “dilute the unit.” By adding these additional yards, the total number of employees was nearly doubled and the physical distance between the yards established organizing challenges. There were also many attempts to intimidate the workers by calling the police and issuing a “no trespass” order to Kirschbaum.

Despite these bullying tactics, the workers of Eastern Bus continued in their struggle to unionize. The drivers distributed leaflets, posters and buttons, and held rallies and informational meetings. Service Employees Local 888, whose headquarters is located around the corner from the Somerville bus yard, offered the Eastern drivers a room in their hall for a rally.

On June 14, the organizing committee held its final meeting before the election to discuss the reasons for forming a union. They received messages of solidarity from Bishop Filipe C. Teixeira, the Black Educators Alliance of Massachusetts and the vice mayor of the city of Cambridge.

In her message of solidarity, Vice Mayor E. Denise Simmons stated: “I am a firm believer in the power of union membership. It is my belief that we are always in a much stronger position to bring about positive conditions, and widespread fairness and respect, when we band together and speak with a unified voice. In unity, we find our strength, and this is essential to ensuring fairness for the individual worker.”

The meeting addressed the workers’ questions and concerns, as well as rumors and falsehoods spread by the employer. Most importantly, the workers were able to show one another their unity.

The election was held on June 18 at the Somerville and Waltham yards, beginning at 5 a.m. Two stalwart organizing committee members, Carlos Fernandez and Tony Chiquillo, arrived at the Somerville yard at 3:30 a.m. to set up a table with refreshments and “Vote Union YES!” placards. Different Eastern drivers, when not on bus trips, were present around the table throughout the day, maintaining enthusiasm and stimulating rank-and-file unity with union shop-talk. Union supporters, including several Boston bus drivers, Ed Childs of Unite HERE Local 26, and Frank Neisser and Gerry Scoppettuolo of the International Action Center, were also present. Local businesses showed solidarity and a National Grid union worker filled the cooler with iced drinks.

The tension was palpable as government agents tallied the ballots immediately after the polls closed. Finally, the totals were announced: 41 votes in favor of the union, 36 against. A sigh of relief was followed by blasting music and victory speeches. The core organizing committee had remained firm.

After losing a decisive battle, the employer began to take illegal action against the workers of Eastern Bus.

“No Trespass” signs blanketed the facility, high-tech surveillance cameras were positioned throughout the Somerville bus yard, a list of rules that violated collective bargaining rights was produced and disseminated, and an anti-union consultant was hired as the new director of labor relations. This agent
of the boss proceeded to physically threaten workers. Perhaps the most grievous anti-union action was the firing without cause of a driver who is a member of the organizing committee after he refused to sign a company-drafted affidavit falsely charging another worker with misconduct.

In addition, the employer submitted a petition to the NLRB challenging the validity of the election. At an NLRB hearing on July 16, the workers packed the room. The employer’s case quickly unraveled because of a lack of merit and convincing evidence.

The hearing officer took nearly six weeks to return a decision on the matter. However, the wait proved worthwhile. On Aug. 23, she overruled all three of the employer’s objections and recommended union certification. Winitzer has until Sept. 6 to appeal the hearing officer’s report.

The organizing committee’s campaign for a just contract began on Aug. 28. The city of Cambridge held its standard orientation for drivers at the Kennedy-Longfellow School. Following orientation, the drivers acquired control of the room and held a meeting with USW 8751 Vice President Steve Gillis and Kirschbaum.

This meeting served two functions: to discuss the next stage of the union fight and to show the director of transportation and the owner of Eastern Bus that the drivers are standing firm in the struggle for their deserved union rights.

Joseph Montuna, a founding leader of the union campaign, says: “Our fight is not against one person, but against a system or a culture of favoritism and injustice. With a good union contract, the ownership must treat all drivers equally and provide benefits to all of us, whether you voted for the union or not. Let’s stand together for our rights.”

Thus far, the union committee has mapped out several aspects of the contract campaign: to have a union election victory party, form a negotiating committee and formulate demands, follow up on more than a dozen NLRB Unfair Labor Practice charges, protect workers under company attack and build rank-and-file union power.

The message is clear: The struggle continues! Workers unite! In unity there is strength!