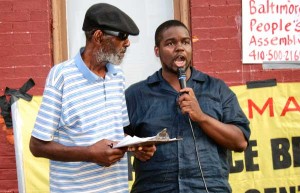 Representatives of the Baltimore Peoples Assembly gathered for a vigil and protest in front of the boarded-up house that Rudy Bell Sr., a homeless veteran, had made his home at 1607 W. Lexington Street. This was also where he was shot to death by Baltimore city police on Aug. 18.

Bell is the 10th person killed by Baltimore police since the beginning of this year. Neighbors said he suffered from schizophrenia. A neighborhood resident, who knew Mr. Rudy, as he was affectionately called, spoke from the microphone displaying a handwritten petition of those who protested his killing.