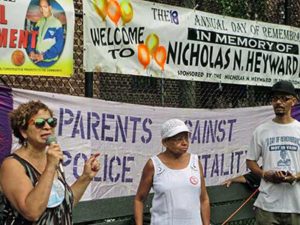 Brooklyn, N.Y. — Nicholas Naquan Heyward Jr. was just 13 years old when he was killed by “Robocop” Brian George on Sept. 27, 1994. Nicholas, an honor student at Nathan Hale Middle School, was playing in a stairwell at the Gowanus Houses where he lived in Brooklyn, N.Y.

The 18th annual Nicholas Heyward Jr. Day of Remembrance was held on Aug. 25. The next day Nicholas would have been 31.

People gathered in Nicholas Naquan Heyward Jr. Park, next to the Gowanus Houses. Brooklyn District Attorney Charles Hines refused to even present a case to the grand jury against the shooter cop. But the people in the neighborhood forced the Parks Department to rename their park after their young hero.

Nicholas Heyward Sr. told people, “A child is supposed to bury his parents. The parents aren’t supposed to bury their child.” Heyward has never stopped fighting for justice since his son was killed. He’s been a mainstay of Parents Against Police Brutality, which helped build the Day of Remembrance along with the Nicholas Naquan Heyward Jr. Memorial Foundation.

Joining Heyward was Juanita Young, whose 23-year-old son, Malcolm Ferguson, was killed by a Bronx cop on March 1, 2000. Police later tried to frame Young, who’s legally blind, for allegedly throwing a box of cake mix at them after they invaded her home and beat her up.

Margarita Rosario told how the pain of losing her son, Anthony Rosario, will never go away. He was killed by two of former New York Mayor Rudolph Giuliani’s bodyguards on Jan. 12, 1995. Rosario and his cousin, Hilton Vega — who was also killed —were shot 22 times, 11 in the back, by police detectives Patrick Brosnan and James Crowe.

Allene Person and Josefa Villanueva attended. Timur Person, Person’s son, was killed by police in the Bronx on Dec. 13, 2006, two days before his 20th birthday. Villanueva’s son, George Villanueva, was framed by Hines for allegedly pushing policeman Alain Schaberger off a stoop to his death, an act Villanueva didn’t do.

Michael Ojeda and Carmen Ojeda told how their 11-year-old daughter, Briana Ojeda, died of an asthma attack on Aug. 27, 2010, while a nearby cop did nothing.

Detective Philip Atkins shot and killed 23-year-old Shantel Davis while she was in a car in Brooklyn on June 14. Davis’ sister, Natasha Duncan, and uncle, Harold Davis, told the crowd that Atkins — who’s had six federal civil rights suits filed against him — lied when he said his gun “accidentally discharged.”

Every Saturday, there’s a march at noon from 38th Street and Church Avenue in Brooklyn to the 67th Precinct to demand justice for Davis. Join the Facebook page Justice4ShantelDavis to get involved in this struggle for justice.

City Councilmember Stephen Levin presented a City Council proclamation in honor of Nicholas Naquan Heywood Jr. A representative for the Malcolm X Grassroots Movement spoke about their “Cop Watch” program. Carl Dix of the Revolutionary Communist Party announced the “Blow the Whistle on Stop and Frisk” demonstration on Sept. 13.