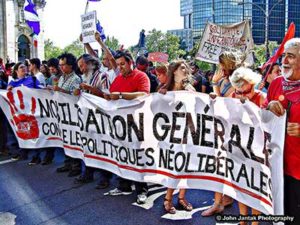 Mass outpouring in Quebec on Aug. 22.

As August began, students in community and senior colleges all over Quebec voted to suspend the student strike that began in the spring and spread to hundreds of schools.

The student struggle is reflected in a provincial election set for Sept. 4. The party leading in the polls, the Parti Québécois, had supported the students and their demands. Its platform called for maintaining the current situation of no tuition for Quebec residents in the community colleges and no increase in senior college tuition.

The PQ even selected a student leader, one of the moderates, as one of its candidates for a seat in Quebec’s National Assembly.

Despite the strike cancellation and the imminent election, the students showed they are determined to remain in the streets.

On Aug. 22, some 100,000 students and their supporters mobilized in the afternoon at Place du Canada in downtown Montreal. Both a representative of the nurses union and the Quebec Women’s Federation were among the speakers. Jeanne Reynolds, co-spokesperson for the student union group, CLASSE, insisted that the movement will continue before, during and after the election.

Many placards and banners on the march brought up the key issues of the student movement: No hike in university tuition fees and repeal of the anti-democratic Bill 78, which became Law 12 when passed last May.

Some placards addressed the issue of amnesty for the more than 3,000 people who face charges for taking part in student protests since the beginning of the strike.

According to media reports, two of the three major Quebec labor federations didn’t take part in the march because it was illegal under Law 12. The student group CLASSE has refused to respect Law 12.

The march also contained many broad, anti-capitalist themes. The lead banner read, in French, “Broad Mobilization Against Neoliberalism.” The speeches the students gave at the wrap-up rally were mostly militantly anti-capitalist.

Two days later, the 100th night march in support of the student strike took place, drawing over 10,000 people even though the cops declared it illegal.