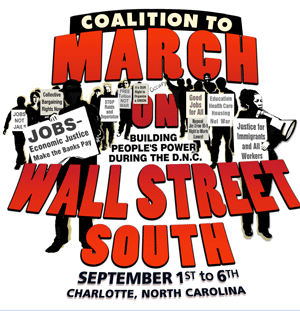 A New York/New Jersey delegation joined a MWSS press conference on July 18 in front of the Charlotte-Meckenberg police station in downtown Charlotte. (See Aug. 2 Workers World issue for earlier coverage.) Among those who spoke were Larry Hales, an organizer with the Bail Out the People Movement, who mobilized for protests during the 2008 Democratic National Convention in Denver, and Teresa Gutierrez of the May 1st Coalition for Worker and Immigrant Rights. This article covers the high points of their talks.

“Dr. Martin Luther King said injustice anywhere is a threat to justice everywhere,” said Hales. “We see that a great amount of injustice still exists in this world, in this country and this city, which many people witnessed by the recent killing of 28-year-old Black man Michael Lainey by the Charlotte-Mecklenberg police department.

“Much of the suffering and injustice emanates from a system that is based on exploiting working people for their labor. Wars; police brutality; closing our schools, social centers, neighborhood pools; firing teachers — cutting back the entire social safety net that we won through years of struggle – are dictated by the wealthy and powerful, the banks, financial institutions and the corporations. That is why we are marching on Wall Street South.”

Hales stressed, “Banks, financial institutions and corporations have been given at least $20 trillion of bailouts in federal money. It’s our tax money that is put into their pockets while we face constant cutbacks and suffering. This is a great crime and a great injustice. The workers create all wealth in society, not the bosses, corporations and banks. If every worker took the day off tomorrow, billions of dollars would be lost. It’s the workers who drive the buses and trains, open the stores, manufacture the goods and pick the fruit. Yet, the bankers and bosses got the largest welfare check ever issued in this country. It is time that we fight back.

“We will be here in September to tell the bankers that we are not afraid of you. We’ll be here every day until then. Occupy Wall Street was just the opening salvo. We will be in the communities — Black, Latino/a, Indigenous, where there are workers, where there are people suffering and facing injustice — to say that we stand for you. Let’s fight for jobs and health care for all. Let’s occupy our schools to keep them open. Let’s occupy our neighbors’ homes and stop the foreclosures and evictions. Let’s stand up for our rights. March with us in September and continue every day after that. All power to the people!”

Gutierrez explained that “Immigrant rights groups, like other progressive organizations, are mobilizing all over the country to come to Charlotte in September. We consider this a very important event. We consider it crucial to send a message to everyone gathering here that what is needed is not millions of dollars for repression but money for jobs, housing and all the real problems that the people of this country face.

“We want to tell you about the fight for immigrant rights. The press talks about the ‘good immigrant’ and the ‘bad immigrant.’ We are for the rights of all the undocumented to stay in this country and to fight for legalization. What could be more criminal than the economic and foreign policies that have forced our brothers and sisters to come here? What forces people to get in a boat in Haiti or to cross that brutal border into Arizona, risking their lives, if it isn’t desperate conditions? Who are the real criminals? Those who force people to come here because of legislation like NAFTA, which destabilized their homelands. That’s the real crime.

“We want to send a message in September that we need unity for all people of color. We want violent acts such as the killing of Trayvon Martin to stop. It took an upsurge of his family and their supporters and many communities to get any attempt at justice for him.”

“That’s our message for September when we will march with the Coalition to March on Wall Street South. We sent a message to Wall Street in New York City last September that the 99% will continue to fight against the 1%. We’re sending that message again in Charlotte.”

Community outreach is going on daily. MWSS mobilizing meetings take place at the Charlotte Solidarity Center every Monday at 7 p.m. For more information and to help with organizing, contact 704-266-0362, [email protected] or [email protected]; view website wallstsouth.org; or visit the Charlotte Solidarity Center at 516E. 15th St., which is open weekdays from noon to 5 p.m.