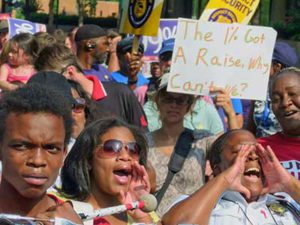 National rallies, like this one in Philadelphia, demanded raising the minimum wage. WW photo: Joseph Piette

As part of a national day of action against poverty wages, over a hundred low-wage workers and their supporters took to the streets of Philadelphia on July 24 to demand an increase in the minimum wage, currently $7.25 per hour and last increased in 2009. The federal minimum wage for workers who receive tips has been even lower — a disastrous $2.13 an hour — for more than 20 years.

A new report from the National Employment Law Project shows that, in terms of actual purchasing power, the current minimum wage is 30 percent lower than it was in 1968.

The spirited protest, organized by Fight for Philly and the Restaurant Opportunity Center of Philadelphia, included a rally near Independence Hall and a militant march along Market Street to the Gallery Mall, home to several large retail stores and fast food chains.

Speakers challenged several big corporations that pay poverty wages to the workers who make them profitable. Once demonstrators reached the mall entrance, they wasted no time opening the doors and taking their message inside, where dozens of store workers and customers alike gave signs of encouragement. The protest ended outside the Burlington Coat Factory, owned by Bain Capital — now infamous for outsourcing jobs and driving down wages.

Similar demonstrations took place across the country on July 24, largely spearheaded by the Service Employees union and Jobs with Justice.