MOWSS organizers have helped to build a multi-city network of more than 20 organizing centers. They report that the Detroit Moratorium NOW! Coalition has chartered a bus, organizers from Occupy 4 Jobs and other groups are coming in vans from New York City, and activists from the South and elsewhere are joining the protests.

For weeks, MOWSS organizers and supporters from many states have been on Charlotte’s streets distributing thousands of leaflets and posters and attending progressive events, including the Pride Charlotte festival on Aug. 25-26. They’ve helped defend women’s health clinics, attended pro-environmental events and gone to city workers’ worksites and rallies.

Elena Everett, of Occupy Durham and a MOWSS Coalition lead organizer, told WW, “As an organizer from the South, the process of pulling together these mobilizations in this coalition has been and is inspiring. It’s truly a grass-roots, homegrown, Southern-led coalition, and it proves that the people’s movement is alive and well in the South.” 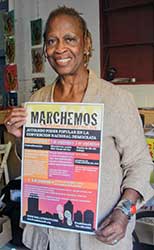 Everett explained: “The South has been historically underrepresented and underresourced. It exists in a legacy of slavery and Jim Crow. It’s important for all justice-minded people to understand the importance and significance of our region. We have a third of the entire population of the country living in the South. The working conditions here are the worst in the country.

“If we really want change in our country, we need to focus on organizing the unorganized and putting forth the resources and solidarity necessary to help Southern organizers organize themselves in their own name. We need to make sure people’s voices are heard, so we need to mobilize and come together.”

Youth and students across North Carolina and beyond are a driving force in this mobilization.

Lifetime Charlotte resident Bryan Perlmutter is a MOWSS volunteer organizer and a member of the North Carolina State University chapter of Students for a Democratic Society. As he participated in a city workers’ informational picket at Charlotte City Hall on Aug. 6, he talked to WW about the city and why it was chosen for the DNC: “It’s evident as you walk around Charlotte that it’s a city centered around Wells Fargo, Bank of America and Duke Energy. It’s clear if you look at political donations and the policies of the Democrats and who they’re really supporting — and that it is the big banks, corporations and big utility companies that are passing the burden along to the people. [The Democratic Party] picked this state and specifically this city to prop up the banks and corporations that they’re working for.” 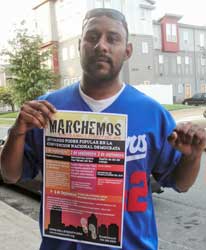 Added Perlmutter: “I see a lot of intersections between the struggles of students and the struggles of workers right now. … [I]t’s important that we support each other. We have a common theme in that we’re both being hurt by the banks and corporations, the 1% that are profiting off our education and profiting off the work of city workers and all workers. So it’s important that we stand together and really come together around our common interests. All our struggles are connected. With solidarity and with support we can join together and overcome the forces that are trying to keep us down.”