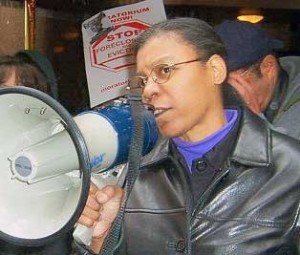 The nationalization of the U.S. mortgage industry by the federal government — a takeover implemented by the Democrats and Republicans to bail out Bank of America and other banks at the expense of homeowners and their communities — opens the door for activists to demand a reversal of these anti-people policies.

The first step in stopping the massive, ongoing foreclosure crisis is to demand that President Barack Obama immediately declare a moratorium to stop all foreclosures and foreclosure-related evictions, and then move to implement a plan to reduce the amount owed on the 11.1 million homes currently underwater to reflect their real value.

The Federal Housing Finance Agency was created by Congress through the Housing and Economic Recovery Act of 2008. Under HERA, the FHFA, a government agency, assumed complete control over Fannie Mae and Freddie Mac, which at the time were quasi-government corporations that controlled approximately half of all mortgages.

Since 2008, Fannie Mae and Freddie Mac have bought up trillions of dollars in failing mortgages from investor trusts. This operated as a silent bailout to the banks, with the banks being paid full value on inflated and predatory loans. Fannie Mae and Freddie Mac then evicted the homeowners following foreclosures and dumped the homes for a fraction of their value, with taxpayers absorbing the losses.

The cost to taxpayers for this practice thus far has been $180 billion, with the Congressional Budget Office estimating the ultimate bailout as $389 billion, while many private estimates are much higher.

According to the FHFA’s 2012 report to Congress, since the federal takeover of Fannie Mae and Freddie Mac was completed in September 2008, Fannie Mae and Freddie Mac have guaranteed three out of every four mortgages originated since that date. Mortgages guaranteed by the Federal Housing Authority make up the rest. A complete nationalization of the mortgage industry by the federal government has occurred.

The federal government pays the banks that originate mortgage loans. Bank of America and other banks, which get zero-percent-interest loans from the Federal Reserve, charge borrowers 4 percent interest, and then pocket the difference when the loans are purchased by the federal government. This practice has resulted in the banks continuing to make record profits. (New York Times, Aug.8)

The HERA mandated that the FHFA implement a plan to maximize assistance to homeowners to minimize foreclosures, considering the net present value to taxpayers. The Emergency Economic Stabilization Act of 2008 — also known as the $700 billion bank bailout bill — similarly mandated the U.S. Treasury to implement loan modification and refinancing programs to aid homeowners.

Despite the federal takeover of mortgage loans, the Obama administration has relied on the banks to implement loan modification programs such as the Home Affordable Modification Program, which was trumpeted as a means of preventing up to 4 million foreclosures. With the banks being paid full value by the government on their inflated home loans, and making millions of dollars in fees on foreclosures, they have no incentive to work with homeowners.

As a result, the modest modification programs announced by President Obama have been a failure, helping less than one-quarter the number of families who have applied. (New York Times, Aug. 19)

By the FHFA’s own estimate, 11.1 million mortgage loans are underwater, meaning the mortgage amount owed is greater than the value of the home. The FHFA acknowledges that the reduction in house prices has resulted in a decline in housing wealth from 2005 to 2011 of $7 trillion. (FHFA Review of Options report)

Despite this reality, FHFA director Edward DeMarco has refused to implement any programs that would reduce principal on mortgages. A July 31 New York Times article implied Demarco was “defying President Obama” by this refusal. DeMarco, however, is a temporary appointment of President Obama, who could fire and replace him.

President has authority to take action

Fannie Mae and Freddie Mac own approximately 180,000 vacant homes. The FHFA plans to sell these homes cheap to investors like Goldman Sachs — who helped create the foreclosure crisis — so they reap more profits as rental properties. (Real Estate Insider, Dec. 4)

The struggle to stop this foreclosure epidemic, which is devastating the lives of millions in the U.S., involves several forms, from anti-eviction home defenses to the launching of a political movement that targets the federal government for bailing out the banks at the people’s expense.

We must demand that President Obama immediately implement a three-year federal moratorium to halt all foreclosures and related evictions, and that he place a director over the FHFA who will begin reducing principal to market value on home mortgages for the benefit of homeowners and their families.

The vacant homes held by the federal government must be used to house the homeless, not line the pockets of investors, and the government should implement a jobs program to rehabilitate these homes for people’s use.

Goldberg is a people’s anti-foreclosure attorney in Detroit and a leading organizer of the Moratorium NOW! Coalition to Stop Foreclosures, Evictions & Utility Shutoffs.