Aug. 20 — Striking platinum miners have defied Lonmin Platinum PLC’s back to work orders and continue their job action in Marikana, South Africa, despite a horrific police massacre and threats of termination. This is the British-based, multibillion-dollar firm’s latest ultimatum to the mineworkers, who walked off their jobs on Aug. 10 to protest low salaries and poor working conditions.

On Aug. 16, police opened fire with automatic weapons on hundreds of striking miners, killing 34 workers and wounding 78 others. They failed to disperse from a hill near the mining facility, which is located outside Rustenburg in South Africa’s North West province.

South Africa’s President Jacob Zuma declared a week of mourning. The South African people have been in a state of shock and outrage since a week of violence culminated with the police massacre of the striking miners.

On Aug. 18, family members of the slain, wounded and arrested miners demonstrated near the Lonmin facilities, demanding information on the fate of their loved ones.

The authorities also arrested 259 miners.Some appeared in court on Aug.20, when they were remanded to stay in custody and a hearing was set for Aug. 27. Other arrested workers have not been located.

Despite orders to return to work, it appears that most rock-drill operators and their assistants have refused to listen to the company bosses. They are demanding their monthly pay be increased from R4,000 ($480) to R12,500 ($1,560).

The situation at the Marikana mines had been tense for days when at least 3,000 rock-drill operators, out of a 35,000-member workforce, embarked on a wildcat strike. Ten people were killed before the massacre; several were union organizers and sympathizers of the National Union of Mineworkers, the largest mining union, an affiliate of the Congress of South African Trade Unions and an ally of the ruling African National Congress (ANC).

Twopolice officers were also killed in the wildcat strike, which is not recognized as a legitimate labor action by the NUM. A smaller rival trade union, the Association of Mineworkers and Construction Union, has been organizing in the Marikana mines and other platinum facilities.

AMCU has denied provoking workers to take out their frustration on the larger ­COSATU affiliate. Both unions have blasted Lonmin Platinum for its failure to raise salaries and improve conditions within the mines and in the surrounding communities.

Deplorable conditions in the platinum mines

The platinum industry in South Africa is the largest in the world, covering 80 percent of the globe’s strategic mineral. Platinum prices dropped in recent months after a period of trading at rates higher than gold.

Although the country is rich in platinum reserves, the overall impact of mining this natural resource has been devastating for workers, their families and their communities. The workers’ anger and frustration have boiled over in recent months as violence has erupted in several of South Africa’s mining facilities.

Vusimuzi Mathosi, who was laid off along with 2,000 workers from the Aquarius Platinum mine at Everest, is a member of AMCU. He said, “This place can only be sustained with platinum. What can we do now?” (Reuters, Aug. 19)

Aquarius closed its mining facilities due to the worsening security conditions in the mines.

At the Marikana Mines, where the Aug. 16 massacre occurred, community residents have spoken out. A Wonderkop resident, Kitumetse, who has two sisters who work in the mines, said: “Our village is right next to the mine. …We all witnessed the shocking events of last week. … Lonmin should have intervened a long time ago. They knew about the miners’ grievances, they knew about the strike, they knew workers wanted management to come forward, but they didn’t intervene and were nowhere to be seen.” (BBC, Aug. 19)

Kitumetse continued, “They dismissed their workers and let this happen. So many people died — fathers, husbands, breadwinners. Now they are threatening workers that if they don’t go back to work, they will be considered strikers and they will lose their jobs. Because of that, my sisters are going back to work.”

Kitumetse stressed, “Lonmin has done nothing for the local community. They take our platinum and enrich themselves but where is our royalty money going? We don’t have [paved] roads and our youth are unemployed. … [Lonmin] cuts off our water supply every day during the day. The water comes back only late at night. Then we have to fill the tanks and the buckets to have enough water for the next day. The water stinks and we have to buy purified water.”

Thandubuntu Simelane, a striking rock-drill operator, resolutely stated that he was not returning to work: “It’s better to die than to work for that s – – t. People are coming back here tomorrow [Aug. 20]. I am not going to stop striking. … We are going to protest until we get what we want. They have said nothing to us. Police can try and kill us but we won’t move.” (Mail & Guardian, Aug. 19)

In addition to the rock-drill operators, other workers have been impacted by the strike. With violence and deaths escalating, many people have not been able to go to work.

Thapelo Mohutsiwa, a surface miner at Lonmin’s mine, said: “I am scared to go to work tomorrow [Aug. 20]. I wasn’t striking because it’s not my department. I have a family to feed and I need money so I must work.” (Mail & Guardian, Aug. 20) However, he sympathized with the strikers: “If you work in that job [rock drilling], you get f- – – -d up. You must drill the rock for the whole day covered in water. For anything more than five years you will end up being useless.”

The violence, including the Aug. 16 massacre at the Marikana mines, has drawn widespread condemnation from sections within the labor movement, the ruling ANC party and the left. 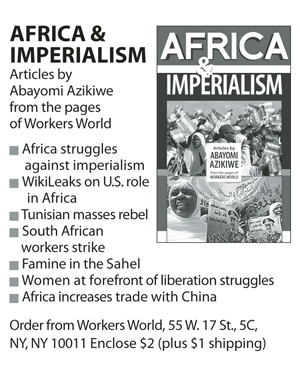 The ruling ANC said on Aug. 18 that it “welcomes the decision of President Zuma to set up a Commission of Enquiry following the death of 34 people at Marikana in Rustenburg. The ANC is of the view that the tragic violence needs to be thoroughly investigated to determine the cause and circumstances of all the deaths, including those of the police, security and the miners.”

The ANC said the next day that it also welcomed Zuma’s decision “to appoint a Ministerial Task Team to assist the Marikana tragedy deceased families with funeral arrangements. … The ANC wants to thank the mineworkers and the people of Marikana for having heeded the call for calm and reflection despite attempts by agent provocateurs who wanted to undermine the call for calm.”

The ANC Youth League advocates the immediate nationalization of the mines and farms as the only means of resolving the wage gaps and the lack of empowerment of the workers, farmers and youth.

The ANCYL reiterated on Aug. 17, “South Africa’s exploitative mining regime, capitalist greed and the poverty of our people are the cause. How many more people must die before we accept that the festering conditions of inequality and ownership by a select few, a white few in particular, is a time bomb that no longer just ticks, it is ready to explode and is contained only by the deadly determination of some amongst us to maintain the status quo at the expense of the majority.

“We condemn in the strongest possible terms the use of live ammunition in public order policing and call on Minister Mthethwa to conduct a full investigation to explain to South Africans how it is that police turned on our people and killed them, when the right to life is paramount.”

The Aug. 19 statement of the Central Committee of the South African Communist Party says in part, “[I]t is impossible to understand the tragedy of last week without an appreciation of how the major platinum mining corporations, sitting on top of over 80 percent of the world’s platinum resources, have created desperate community poverty, divisive tensions, and a fatalistic attitude toward danger and death. It is also not possible to understand the tragedy without understanding how profit-maximizing corporate greed has deliberately sought to undercut established trade union and collective bargaining by conniving with demagogic forces. This strategy has now back-fired on the platinum companies’ profits themselves.” 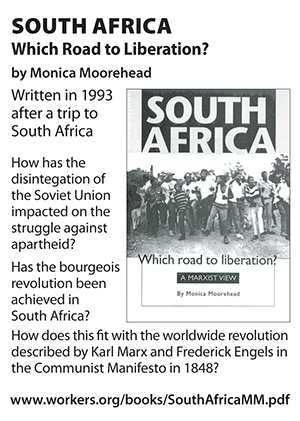 The SACP “rejects the attempt to portray the events of last week as being essentially rooted in trade union rivalry. This narrative is no different to that developed during the final years of apartheid, when armed vigilantes, fomented, trained and escorted by the apartheid regime, were unleashed on our United Democratic Front, COSATU and ANC-supporting communities and this was portrayed as ‘black on black violence.’”

As the world capitalist system declines, the bosses and bankers will apply more pressure on the workers to accept lower wages and poor working conditions. Although South Africa has the largest economy on the continent and the strongest and most organized working class, the compromise made 20 years ago between the ANC and the then-apartheid regime left in place a capitalist state and ruling class that have imposed neoliberal policies on the ANC government.

The working class has not been able to exercise the power needed to win adequate concessions from the mine owners, let alone seize the means of production on behalf of the proletariat. Legal apartheid was eradicated but not the root cause of it — which translates today to the 1% controlling 99% of all the wealth.

The situation facing the ANC must be viewed within the context of the overall international struggle of the workers and the oppressed against capital. The ANC government has developed one of the most advanced constitutions in the world where national and gender equality is enshrined in law. There have been advances in income within certain sectors, home building for millions of workers and the integration of the security apparatus and the military. However, the needs of the workers and the poor cannot be fully addressed under the existing capitalist relations of production.

As NUM said after the recent massacre, “The various social challenges that the country faces such as the ever increasing number of informal settlements next to mining areas; high unemployment; the continuous existence of single-sex hostels; the increasing number of working poor exacerbated by the continuous existence of the apartheid wage gap and tribalism would if not curbed result in large scale disintegration of the South African society.”

NUM accuses the Chamber of Mines of refusing to comply with transformation targets set up by the ANC government. Yet it will be the ANC government’s responsibility — backed by the working class and the youth — to enforce these goals against the profit-making aims of the bosses’ and their allies within South African society.

The platinum industry’s profits have declined, and the bosses will put more pressure on the workers and mining communities. The recent Marikana massacre has caused an even further decline in Lonmin’s and other firms’ stock values. IndexUniverse, a financial analyst firm, noted, “[It] was enough to unleash an exodus from the South African rand last week … with a negative impact of about 3.5 percentage points for U.S. investors.” (Aug. 20)

This unbearable pressure on the workers can only be ended when South Africa takes back the country’s wealth from the exploiters, who have grown rich off the misery of the millions.