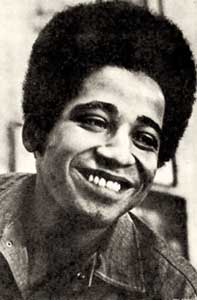 George L. Jackson, whom prison guards gunned down several weeks prior to the Attica Rebellion, became a symbol of the revolutionary mood among African-American prisoners in the U.S.

This year is the 33rd anniversary of Black August, the annual commemoration of the liberation struggle of African people inside the United States. The month of celebration and reflection was initiated by political prisoners, many of whom were members of the Black Panther Party and the Republic of New Africa, two of the main revolutionary organizations that emerged during the late 1960s.

One of the most widely spread falsehoods both inside and outside the U.S. is that there are no political prisoners. Yet there are untold numbers of people behind bars who were targeted, prosecuted and railroaded due to their political beliefs and activities.

The movement for African liberation has been criminalized since the days of slavery. Prisons were built during the antebellum period for enslaved Africans who tried to escape from bondage.

After the failure of Reconstruction, African Americans were subjected to arbitrary incarceration, lynching and forced exile from their places of birth. An entire penal code was established in Southern and Northern states designed to control the movement and political actions of the former enslaved population.

In the 1920s, the Honorable Marcus Garvey, whose date of birth, Aug. 17, 1887, falls within the month of Black August, was framed on spurious charges, imprisoned and later deported from the U.S. in 1927. Garvey had built the largest mass organization of African people up until then.

During the Great Depression of the 1930s, African-American communists took the lead in forming Unemployed Councils that fought for jobs and against evictions. These efforts were met with widespread repression, including arrests and even political assassination.

In his book entitled “Black Bolshevik: Autobiography of an Afro-American Communist,” Harry Haywood noted that in Chicago the “police force undoubtedly held the record for terror and lawlessness against workers. They were unsurpassed for sadism and brutality, regularly raiding the halls and offices of the Unemployed Councils, revolutionary organizations and the [Communist Party USA] — smashing furniture, beating workers in the halls, on the streets and in the precinct stations. Hundreds were arrested.”

Haywood continues: “In 1930, the police murdered Lee Mason, a Black communist candidate for Congress. Harold Williams, a Party organizer in the Southside and an old schoolmate of mine from Moscow, was viciously beaten. Although hospitalized, he never fully recovered and died a few years later in New York.”

In the aftermath of World War II, the Smith Act, first passed in 1940, established criminal penalties for advocating the overthrow of the U.S. government, which was used against members of the CPUSA and to repress all leftists. Several leading African-American leftists and communists, such as Henry Winston, attorney George Crockett Jr., Dr. William Alphaeus Hunton, Claudia Jones and W. E. B. DuBois, were prosecuted. All of them except DuBois served time in prison.

Claudia Jones, perhaps one of the most prolific writers and theoreticians of the communist movement between the 1930s and 1960s, was sentenced under the Smith Act in 1953 and was imprisoned in 1955 in the infamous Alderson Federal Prison for Women in West Virginia. As a result of the horrible conditions there, her health deteriorated, and she was released and deported to England where she continued organizing activities until her death in 1965.

In 1955, the African-American Civil Rights movement took on a mass character with the Montgomery Bus Boycott led by Rosa Parks, E. D. Nixon and Dr. Martin Luther King Jr. The boycott was sparked by the arrest and prosecution of Parks for violating Alabama’s segregation laws.

By 1960, African-American students took the lead in the movement when hundreds were arrested in sit-ins and other mass protests throughout the South. Dr. King and other Civil Rights leaders were frequently beaten and arrested, while Southern segregationists fired people from their jobs, put them off their farms, as well as bombed homes and murdered activists.

With the advent of armed self-defense, as exemplified by people such as Robert F. Williams of the Monroe, N.C., NAACP and the Deacons for Defense in Louisiana, a new phase of the struggle emerged. Later urban rebellions would sweep areas throughout the U.S., and armed revolutionary organizations emerged.

Another wave of repression took hold during the mid-to-late-1960s resulting in the assassinations of Malcolm X, Dr. Martin Luther King Jr., Fred Hampton, Mark Clark and many others. Hundreds of the leading organizers in the Black Panther Party and the Republic of New Africa were arrested and imprisoned for their political beliefs.

By the early 1970s, the struggle inside the prisons was accelerating. Rebellions erupted in numerous correctional facilities throughout the country, the most notable being the Attica uprising of September 1971.

George L. Jackson, whom prison guards gunned down several weeks prior to the Attica Rebellion, became a symbol of the revolutionary mood among African-American prisoners in the U.S. Assata Shakur, of the Black Liberation Army, was arrested in 1973 along with Sundiata Acoli in New Jersey.

Shakur was liberated by her BLA comrades and members of the Weather Underground on Nov. 3, 1979. She has been living in revolutionary Cuba for over three decades and remains committed to the struggle against national oppression and capitalism.

Despite the claims by the ruling class that the Civil Rights laws of the 1950s and 1960s created a post-racial society in the U.S., the prison population and the rates of poverty among African Americans and Latinos/as contradict these assertions. Today there are more African Americans in prison than ever before.

In fact, since the time of the Attica Rebellion, the incarceration rate of African Americans has grown by over 500 percent. U.S. Justice Department data reveal, “Approximately 12-13 percent of the American population is African American, but they make up 40.1 percent of the 2.1 million inmates in jail or prison.” (2009)

The Justice Policy Institute reported that there are more African-American males in prison than in colleges or universities. The leading cause of this incarceration rate is targeted arrests and convictions and longer sentences meted out to Black people for nonviolent drug offenses.

Today there is a revival in the protest movement among prisoners in the U.S. In several states such as California, North Carolina, Georgia, Ohio and Illinois, prisoners have staged hunger strikes to draw attention to the deplorable conditions under which they live.

In early 2011 the most widely publicized resistance by inmates took place in California’s Pelican Bay State Prison. The document issued by the Prisoner Hunger Strike Solidarity Coalition states that the group has “worked tirelessly to get mainstream media to cover the strike and expose the torturous conditions within the California Security Housing Units, as well as within prisons in general.” (prisonhungerstrikesolidarity.wordpress.com)

The Pelican Bay hunger strike began with a few dozen inmates. However, within a few weeks the total had risen to 6,600.

This movement is spreading throughout the country, with prisoners in Virginia and North Carolina the most recent to join in. Corporate media outlets have been consistent in denying coverage of these developments in an effort to prevent mass support and to halt these forms of resistance from spreading even more rapidly around the U.S.

In honor of this year’s anniversary of Black August, social justice activists need to support the hunger strikes and other organizing work among prisoners. These inmates are part of the working class and the nationally oppressed masses.

As the economic crisis worsens, the state will become even more repressive. The struggles of the men and women inside the prison walls must merge with the organizing efforts of those on the outside to target exploitation, national oppression and all forms of injustice.