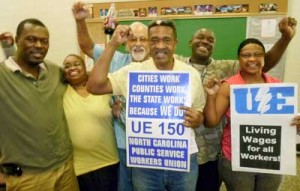 On the opening day of the Democratic National Convention, Sept. 3, workers from throughout the South will hold a Southern Workers Assembly. They will gather to speak out about our vision for worker rights as human rights, and begin initial planning toward a rank-and-file-led workers movement in the South to realize those rights.

An SWA press release states: “The mainstream U.S. and international media will flood the City of Charlotte to cover the DNC. They will hear politicians hovered over by highly paid lobbyists, who will talk about their visions for the American economy and a democratic society, but none will speak about the issues and denial of rights for workers throughout the South.“

The struggle of Charlotte city workers will be a core struggle represented at the assembly. Sanitation workers, water and sewer workers, bus drivers and many others that work for the city have been forced to work longer routes as the city has grown rapidly over the last 10 to 20 years, while the city work force has not grown at nearly the same rate. The Charlotte city workers chapter of UE150, the N.C. Public Service Workers Union, will be starting weekly pickets at City Hall on Monday, Aug. 6, to draw attention to their demands for a Municipal Workers Bill of Rights, which includes a payroll dues deduction. Even with a 9-2 Democratic Party majority, the dues deduction has continually been denied by the Charlotte City Council.

Angaza Laughinghouse, president of statewide UE local 150, said: “In an economy that demands that the majority of the people work in order to provide the basic necessities for themselves and families, worker rights are human rights. Yet, despite a ruling by the International Labor Organization, an agency of the United Nations, that the U.S. and North Carolina are out of compliance with international laws and conventions, neither the Bush nor Obama administrations have taken action to bring the U.S. and North Carolina into compliance. The U.S. is obligated, by treaty, to enforce this international law.”

The SWA will be held on Sept. 3 at Wedgewood Baptist Church in Charlotte, starting at 1 p.m. It will include workers speaking from the public and private sectors, and from sectors excluded from protections under the National Labor Relations Act or state laws. The SWA will generate some initial planning for a meeting to form a Southern Labor Alliance to unite local unions, worker organizations, worker centers and supporters in launching a campaign to organize a labor movement.

“Since farmworkers are excluded from U.S. labor laws, we will be present at the SWA to build relationships and raise awareness about the abhorrent conditions in which most tobacco farmworkers live and work, as we continue to pressure Reynolds American and other tobacco giants to guarantee labor rights for the Southern workers in their supply chain,” stated Justin Flores, organizer with the Farm Labor Organizing Committee, AFL-CIO.

The enslavement of African peoples set the basic philosophy and standard for the relationship between employer and workers in the South. In a nutshell, this meant that Southern workers had no rights that the employer was bound to respect.

From the 1970s through the 2000s, the legacy of denying worker rights throughout the South has continued — from brutal corporate anti-union campaigns like those involving J.P. Stevens in North Carolina; the Charleston ILA in South Carolina; and Smithfield Foods in North Carolina, all of which included the beating and jailing of pro-union workers. Twenty-five industrial workers, who had no union, were killed at the Imperial Foods Company in Hamlet, N.C. The SWA is the continuation of a movement to challenge and end this anti-worker legacy.

To learn more and see a list of endorsers, visit southernworker.org or contact Saladin Muhammad at 252-314-2363 or [email protected]