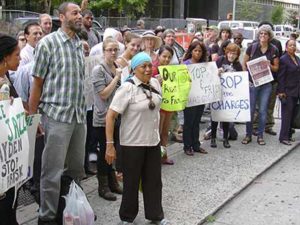 New York — Joseph “Jazz” Hayden, age 71, is an African-American Harlem resident. On his neighborhood “cop watch” beat, armed with his camera, he videotapes police brutality against Harlem residents, including unlawful stop-and-frisks. Hayden has been a longtime community activist and police reform advocate fighting to end the racially biased harassment of people of color.

In December 2011, Hayden was stopped by police. He and his car were searched, resulting in his arrest. He was charged with two counts of felony possession of weapons. The weapons were a commemorative mini-replica of a baseball bat and a pen knife. Each count carries a maximum sentence of seven years in prison.

The bogus arrest was in retaliation by the cops for Hayden’s work as a people’s reporter. The cops acknowledged knowing who he was when they stopped him. These same cops had been filmed by Hayden several months before while they conducted another illegal car stop and search.

On July 31, a criminal court hearing forHayden was scheduled. A multinational group of between 75 to 100 Hayden supporters — including Hayden’s attorney, Sarah Kunstler — held a press conference and rally in front of Manhattan Criminal Court. Speakers represented several New York and Philadelphia activist organizations.

Hayden commented on the amount of tax dollars and human resources being used against him. “How outrageous, ridiculous and senseless. These guys are nothing but bullies trying to intimidate me,” he added, pointing to the cops.

He continued, “The cops pulled me over claiming that I had a broken brake light; but it wasn’t broken. They also lied in their report, saying that I reached for a weapon when they stopped me. How stupid would I have been, reaching for a pen knife and a small bat against armed cops?”

Referring to a cop on the courthouse steps filming the group, Hayden questioned how it is that the New York Police Department can film us, but we can’t film them. “According to U.S. Attorney General Eric Holder, citizens have a right to record police in the public performance of their duties,” he added.

Supporters packed the courtroom, hoping to witness racial justice being served for a change. The case, however, was postponed until Oct. 11. A previous court hearing had also been postponed.

After leaving the courtroom, Kunstler gave a brief summation of what happened in court. District Attorney Cyrus Vance, she said, intends to convene a grand jury and indict Hayden sometime in September. She emphasized the need for supporters to continue mobilizing to get the charges dropped.

“The current charges against Hayden are payback for his getting involved. The NYPD retaliates against known community activists who are in the streets filming them. It is police practice to silence dissidents. And the system derails movements by putting people on trial and in prison. They took notice, the judge, D.A. and others in the courtroom. Advocacy does make a difference. Power to the people!”

Outside the courtroom Hayden thanked everyone for their support and asked that they continue to stand by him. “Surrender and an admission of guilt are not options,” he stated. “I love you all.” The group responded with “We got your back” and “We’ll make sure you get justice.”

“I’ll continue as long as I have your support. We must stand up for our rights and not give up the fight,” Hayden added. “Some things in life are worse than prison, and that is living in the world without self-respect, without honor.”

Following the rescheduling of Hayden’s case, in an online conversation with Bernard White, program director and producer of Community Progressive Radio, Hayden talked about the street life of growing up in Harlem and its harsh environment and about why and how it became ghettoized.

“Black communities nationwide have the same problems. Police abuse and attacks don’t happen in white neighborhoods. Cops are supposed to be public servants, but do not provide service, courtesy, professionalism or respect in Black communities. They’re mostly interested in getting a paycheck and their benefits. Police do not have a right to search and seize anything without a warrant. But all too often judges conspire with them. Their jobs are to defend the interests of the rich and protect the white supremacy status quo,” Hayden stated.

“Although caught on camera in the middle of committing criminal acts, cops are never prosecuted for their crimes. And the white-majority media minimize police acts. Moreover, the Black community is always portrayed negatively in the media. Yet, only 6 percent of stop-and-frisks [reveal] any crime having been committed. Cops need to be scrutinized, along with Mayor [Michael] Bloomberg and Police Commissioner [Ray] Kelly. None of them care about the Black community.” Hayden also mentioned that, ironically, he had campaigned for District Attorney Vance and helped him get elected. “The D.A. now needs to do the right thing,” he said.

“My case is a result of NYPD retaliation and an attempt to drain my resources and silence folks like me who stand up,” Hayden stated. “I’m not compromising; the case is bullshit! It’s time for justice!” (CPRMetro.org)

Hayden said that he is encouraged by letters he receives from around the country. To get involved with the struggle to drop the charges against him, go to allthingsharlem.com and freejazzhayden.wordpress.com, which includes an online petition.