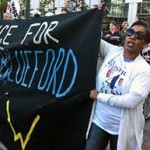 Oakland, Calif. — More than 100 people rallied at City Hall on July 31 to demand justice for Alan Blueford. An 18-year-old Black youth, Blueford was killed by a police officer just days before he would have graduated from Skyline High School. Guilty only of standing on a corner while Black, Blueford was shot three times by Officer Miguel Masso of the Oakland Police Department on May 6 and left to bleed out and die on the street.

The coroner’s report, released this month after mass pressure, stated that there was no gunpowder on Alan’s hands and no drugs or alcohol in his system. The July 31 rally demanded that Officer Masso be fired; that he be tried for murder for Blueford’s death; and that the Oakland City Council use their authority to push for the immediate release of the police report. 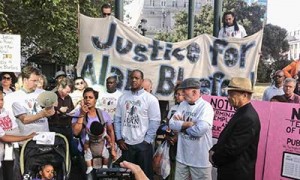 Speakers at the rally included Blueford’s parents, Jeralynn Blueford and Adam Blueford; and attorneys Dan Siegel and Walter Riley. Hip-hop artist Jabari Shaw performed. Boots Riley, the final speaker, spoke about how the mainstream media have hyped people into believing that cops are really trying to protect them. He said, “When police do kill, they are usually pre-justified by the media and [TV] shows like ‘Law and Order.’”

In a lead-up to the rally, Tanesha Blye, Blueford’s cousin, addressed the City Council on July 26, and then served people’s subpoenas to the eight city council members and Mayor Jean Quan, demanding their attendance at the rally. None of the council members nor the mayor showed for the event, so the Justice 4 Alan Blueford Coalition posted a huge “notice of termination” announcement on the doors to City Hall. The notice included the demands stated above, a repeal of the Officers’ Bill of Rights and an end to the “stop and frisk” laws, which have become “stop and kill” laws.