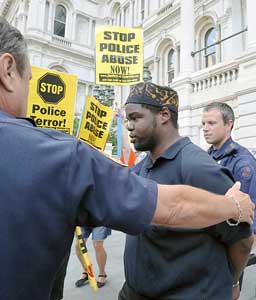 Baltimore, Aug. 6 — Undeterred by the over-90-degree heat, a crowd of nearly 100 people gathered in Baltimore today to protest police terror and the closing of recreation centers throughout the city. The rally began at 3 p.m., and by 3:30 a spirited march surged toward City Hall, chanting “Stop police terror!”

The crowd consisted of many family members and survivors of police terror. In addition, a slew of Occupy Wall Street activists from Baltimore and Washington, D.C., joined the rally. A contingent from the UNITE HERE union was present, as were numerous other activists and organizers from the African-American community of Baltimore, including the Southern Christian Leadership Conference and Churches United.

When the protesters arrived at the cobblestone area in front of City Hall, the Rev. Cortly “C.D.” Witherspoon and Sharon Black, organizers of the Baltimore Peoples Assembly, announced that they had a letter to present to Baltimore Mayor Stephanie Rawlings Blake. The letter consisted of three demands: community control of the police, jobs for all, and no closing of recreation centers or fire stations.

The letter had been crafted by the Baltimore Peoples Assembly, which gathered June 30 to forge a people’s agenda against the police terror and economic misery that plagues the city. The letter stressed the need for resources to be spent on providing for human needs and for action to be taken against the daily reality of police terrorism.

After reading the letter to those gathered, the Peoples Assembly representatives entered City Hall to deliver the letter to the mayor. They made clear that they had no fear of being arrested if they were blocked from seeing this elected official who claimed to represent them.

A spirited rally began in the heat of the afternoon, chaired by Andre Powell, American Federation of State, County and Municipal Employees, Baltimore Metropolitan AFL-CIO delegate and leader of the All Peoples Congress, and Leon Purnell, president of the Southern Christian Leadership Conference Baltimore chapter.

Among those who spoke was Richie Armstrong, a leader of Churches United, who had been arrested protesting for jobs along with three other unemployed workers. One of these workers was severely beaten and brutalized by police at a march for jobs on March 29.

Joyce Fisher, a well-known activist from the Poplar Grove neighborhood, addressed the crowd. Activists involved in the struggle to save the Falls Point Recreation Center described the ongoing fight to save this community resource as well as the good-paying union jobs the recreation centers provide.

Many victims of police brutality and their family members spoke. The mother of David Yimm recounted how her son was shot in his car by the police, who put four bullets through the car window. Marcella Hollomau spoke about the brutal police killing of her son Maurice Johnson, and supportive friends read a poem she composed in his memory. Renee Washington spoke of her fiancé, who was murdered by the Baltimore police.

Lee Patterson, speaking for Workers World Party, outlined how these community struggles were linked to the struggle against capitalism and U.S. imperialism.

Activists arrested after mayor refuses to meet with them

As the rally continued, Witherspoon and Black remained inside City Hall.

According to their accounts, both remained insistent that they were representing the voices and will of the Baltimore Peoples Assembly. Because of this, they asserted, they could not leave until they got an answer from the mayor that City Hall would take the demands seriously and would set a meeting.

The mayor’s aide continued to push the view that the organizers needed to make their request electronically and that no guarantees could be made. A host of police representatives including Major Smith, the head of Central District Police, spoke with the two Peoples Assembly delegates and tried to convince them to change their view.

At 5:30 p.m. the building was closed to anyone wanting to enter. Police wagons had arrived at the scene and a SWAT team of police was assembled along with regular City Hall police.

A tense 90 minutes passed as Witherspoon and Black were held inside.

Around 6:30 p.m. Witherspoon and Black were taken from the building in handcuffs, escorted by officers in SWAT uniforms. The crowd of activists, community members and police terror victims roared in anger at their arrests, as the two were dragged through the crowd toward a police van.

National Lawyers Guild attorney Curtis Cooper was dispatched to see that Black and Witherspoon were released. The two were charged with trespassing.

The entire rally was streamed across the internet by a Washington, D.C., Occupy activist. Countless city workers stopped by the rally with interest, listening and agreeing with much of what was said. With chants of “We’ll be back!” the crowd made thunderously clear their efforts would continue as they marched away from City Hall.